Martin Center gets support from the Buhler family 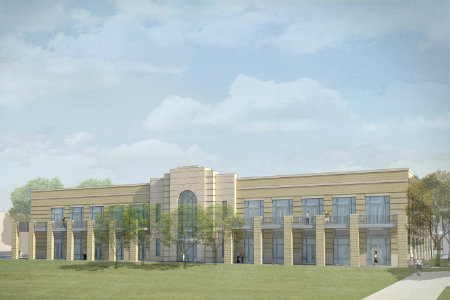 The Texas Wesleyan renaissance is garnering support from many sources, including families who have invested in our mission, and many of you.

Frank X. Buhler was a special kind of philanthropist. When considering those he could support with his financial success, he sought out institutions that had the capacity to help others like him: immigrants and other underserved populations. So although Buhler had no direct connection to Texas Wesleyan except through fellow Alcon executives George Leone and Ed Schollmaier, Buhler donated $2 million in 2010 — for business student scholarships and needed land acquisitions — before his death in 2014.

In July, his children, David and Andrea, continued this mission by giving $1.5 million of The Frank and Jean Buhler Charitable Fund toward the construction of the new University Center. David Buhler says they were drawn to the project because of its importance to student engagement.

“Andrea and I feel a responsibility to carry out our parents’ values and see this gift to Wesleyan as a wise investment in the education of students,” he says. “I know my parents would greatly appreciate this.”