Save the date! The Martin University Center Groundbreaking is April 19 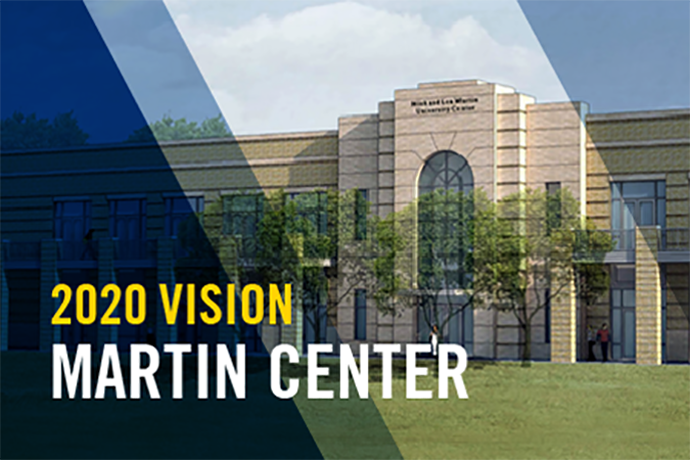 We’re making history at Texas Wesleyan and we want you to be a part of it.

Join President Frederick G. Slabach, the Board of Trustees, students, faculty, staff and alumni at 4:30 p.m. Thursday, April 19, for the ceremonial groundbreaking of the most significant capital improvement project at Texas Wesleyan in 100 years, the Nick and Lou Martin Center.

This University project will benefit past, current and future Rams for years to come. Everyone will have the opportunity to play a special role in the ceremony, so mark your calendars for this historic event.

About the Martin Center

The Martin Center will be a centrally-located hub for student life and engagement in the heart of campus, and provide meeting space for east Fort Worth community leaders and friends.

Located between the Eunice and James L. West Library and Canafax Clock Tower, the Martin Center will be approximately 44,000-square-feet and two stories tall. It will include a new student and family welcome center, food court, ballroom that can accommodate 300, bookstore and convenience store, spaces for student organizations and student life offices, lounge areas, meeting rooms and additional office space.

Named in honor of Nick and Lou Martin

The center is named in honor of Nick and Lou Martin of Fort Worth, longtime supporters of Texas Wesleyan.

The center is the next bold step in Texas Wesleyan’s 2020 Vision strategic plan. Over the last five years, the University has nearly doubled its endowment, grown enrollment and invested more than $23 million in campus enhancements and improvements.

The Martin Center builds on the success of the Rosedale Renaissance project by focusing the University life toward Rosedale Street, a key touchstone in Fort Worth’s continued economic viability and development. The Center will be the most significant meeting place on the East Side of Fort Worth, and will become the center of revitalization.