The history of student hangouts at Texas Wesleyan

The Nick & Lou Martin University Center will be home for the Texas Wesleyan students of the 21st century. Seeing what’s ahead has a way of making you remember the past. 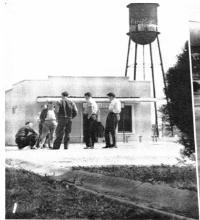 ‌In the time leading up to World War II, there were few places for students to get together, especially with the opposite sex. There wasn’t much outside of the parlors in each dorm where students gathered for activities like literary society meetings.

In the 1930s, students started to frequent the bookstore, the Trading Post, across Rosedale Avenue from the Administration building. Nearby Renfro’s drugstore also attracted students with its soda fountain and snacks.

In 1949, University President Law Sone purchased an old army surplus building that was used as a post office in Oklahoma. It was taken apart, brought to Texas Wesleyan and rebuilt east of Ann Waggoner Hall. The building was named the Boaz Student Center. It had two large conference areas, a snack bar and soda fountain, college bookstore, ladies lounge, men’s washroom, a cloakroom and lounge area.

The building was later converted into classroom space and renamed Boaz Hall. It was eventually demolished in 1989.

The Brown-Lupton Campus Center, that is still standing today, was dedicated in 1981. At the time, it had the best conference meeting space in the University’s history. The building also had a game room, bookstore and the Quadrangle, a space with a snack bar and patio seating.

The most popular feature was the TV room that had color TV and vending machines.

The brand new University Center is the next step in the Rosedale Renaissance and 2020 Vision to revitalize the Texas Wesleyan and Polytechnic Heights neighborhood. Keep checking back for more updates and information on the University Center.