Mover and Shaker: Jorge Vivar ’76, from Peru to TXWES 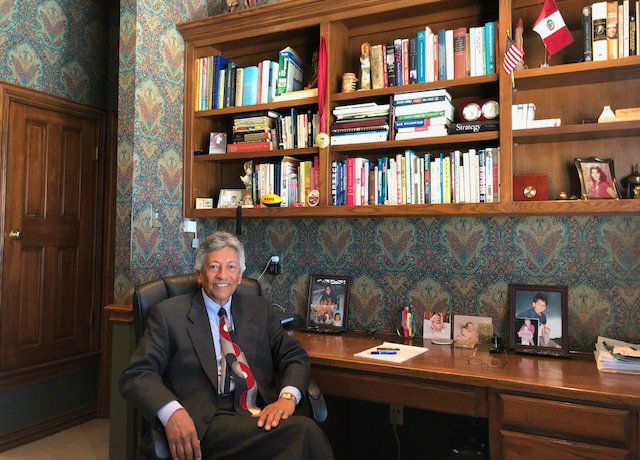 Jorge was born and raised in Lima, Peru. After graduating high school there, his plan was to attend the Universidad Mayor de San Marcos and become a medical doctor. Around that time, Jorge’s father was appointed consul of Peru for Fort Worth, Dallas and parts of Oklahoma, which brought his family to Fort Worth.

When looking for colleges, Jorge and his parents fell in love with a small, friendly university called Texas Wesleyan College. Jorge is thankful for the professors who took the time to explain subjects that were a foreign language to him. He soon discovered the medical path was not right for him and began to explore other interests like business, travel and languages. After earning his BBA from TXWES in 1976, he went on to hold positions as regional sales manager with Southwestern Petroleum Corporation and managing director of the international division of SCS/Frigette.

In 2002, Jorge founded his own company in Fort Worth, Automotive Solutions, LLC. The company exports and distributes automotive air conditioning parts and components to various countries across the world. Automotive Solutions, LLC is paving the way in product sales and assisting international distributors to develop local markets. Jorge and his team get to work with people of different backgrounds, beliefs and cultures, but everyone shares similar goals: a good job, the ability to provide for their family and the opportunity to have a decent life.

Here is what Jorge had to say about his time at TXWES:

About two weeks into my first biology class, Professor Smith asked me if the course might be too elementary for me. I asked her why she would ask that and she indicated that she did not see me taking notes or being involved. I responded that the reason was a lack of understanding much of what she was saying and that she was speaking too fast. Smith also noticed that written tests were difficult for me in the way of translating my answers to English. She provided the opportunity for me to take oral tests, which allowed me to use my hands and better explain my answers. My greatest memory is that she noticed, took the time to ask and then offered to help me. Smaller. Smarter. – even back then!

How did TXWES contribute to your success and prepare for your career?

By starting small at Texas Wesleyan and gradually being exposed to larger arenas, TXWES gave me the confidence and tools to meet people and face challenges and opportunities ahead.

What’s next for you?

Having worked internationally for nearly 40 years and having travelled for business worldwide, I am now looking forward to “less strenuous” travel: Travel for fun!

What is an interesting fact about you that people may not know?

I'm married to Denise, who is a TCU graduate and we have two children. Alexandra graduated from TCU and is a speech pathologist and Anthony is a junior at Penn State University, majoring in kinesiology. In my spare time, I enjoy traveling, reading, tennis and soccer.