See new Smaller. Smarter. spots – and get a #TXWES t-shirt! 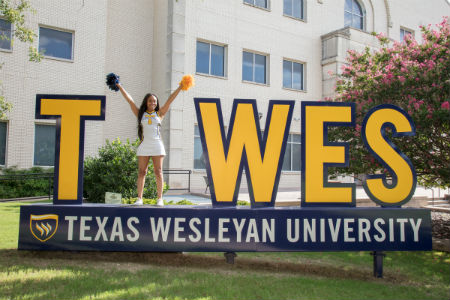 “The ‘Smaller. Smarter.’ campaign has been a runaway success for more than five years, and we are especially excited about this year’s versions, which are very, very funny,” Slabach said.

This year, the Office of Marketing & Communication will offer new, limited edition Smaller. Smarter. t-shirts featuring a brand-new design. Shirts supplies will be limited this year. If you would like to receive a t-shirt at the event:

Since 2012, Texas Wesleyan’s marketing campaign has won more than 90 awards and has played a central role in the University’s raising awareness and perception – it is the fastest-rising university in the Dallas-Fort Worth area in both categories. The advertisements, which feature a funny lead clip followed by a punchline that payoffs the value of a small school education, have become an ingrained part of the university’s institutional culture.

Slabach will also give an update on the results of Wesleyan’s comprehensive, integrated marketing campaign as it pertains to perception, awareness, enrollment and other key benchmarks.

You must be present and have completed all the steps listed above to be eligible to receive a t-shirt. Shirts will not be provided to those not in attendance.

This Smaller. Smarter. event is open to faculty, staff and students.