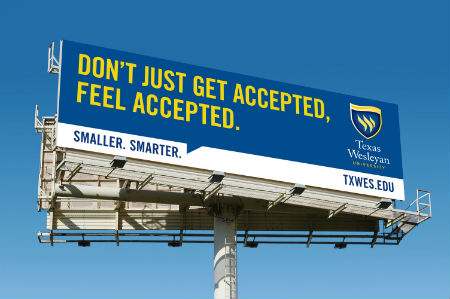 The wait is over for Smaller. Smarter. fans.

“When this campaign started in 2012, Texas Wesleyan was receiving less than 800 freshman applications a year. This year, thanks to the combined efforts of many at the University, including marketing, admissions and financial aid, our new applications topped 4,000 for the first time." Slabach said. “Our ‘Smaller. Smarter.’ commercials and billboards continue to draw students to our affordable, private and purposely small university.”

This is the sixth consecutive year of the Smaller. Smarter. campaign. It has been two years since the University created new commercial footage. The commercials were shot on campus last spring, using real Texas Wesleyan students and faculty. The 2017 campaign consists of six billboards and four new commercials.

The television ads are expected to reach more than 1.3 million 18- to 24-year-olds and 3.8 million 25- to 54-year-olds and will air on broadcast and cable networks, including ABC, NBC and ESPN. They will also be seen by approximately 1.5 million moviegoers in Dallas-Fort Worth theaters. In addition to the commercials, the billboards will be strategically positioned throughout Dallas-Fort Worth to reach more than 3 million North Texas residents.

The new billboard ads feature sayings that build on the success of the first "Smaller. Smarter." campaign and are designed to engage the entire community:

“Where Freshman 15 means class sizes” – a universal favorite, will continue to run, in addition to the new phrases above.

“‘Smaller. Smarter’ goes beyond the commercials and the billboards,” Darren White, associate vice president of marketing and communication, said. “It’s a primary value of choosing Texas Wesleyan and is recognized by students, staff and faculty across campus.”

According to data gathered by Student Insights, previous year's campaigns have registered the largest increase in awareness among all Dallas-Fort Worth based institutions, including UNT and UT-Arlington, and led to a 209 percent increase in applications from Dallas County.

In addition to generating measurable success, the marketing team has won more than 90 awards for outdoor advertising and design, direct mails, email marketing and more. The awards include Collegiate Advertising Awards, Educational Advertising Awards and Fort Worth Addy Awards.