Table Tennis 101: The low down on what's going to go down at nationals 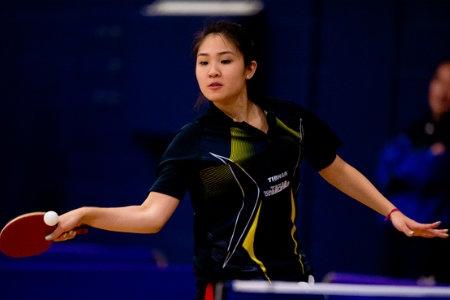 As the Texas Wesleyan University table tennis team heads off to Eau Claire, Wis., to defend its NCTTA National Championship for a remarkable 12th time, take a look at a breakdown of how the tournament works and where fans can find live coverage and results.

The doubles competition features a single-elimination bracket. All matches are best 3 out of 5 games.

There are eight teams in the women's draw, including Texas Wesleyan's Anastasia Rybka and Caroline Kajihara, who are seeded second behind Ariel Hsing and Erica Wu of Princeton.

The men's bracket includes 30 teams, and three squads from Texas Wesleyan. The Mississippi College duo of Cheng Li and Tong Zhang is the top seed followed by the Rams' Zhe Feng and Bruno Ventura and then the combo of Zhedi Bai and Emil Santos.

Men's and women's singles will begin on Friday with pool play. Matches are best 3 of 5 until the semifinals and finals which will be best 4 out of 7.

The top athletes from the preliminary groups will advance to the championship single elimination bracket on Saturday with all others moving to the consolation bracket.

Ariel Hsing (Princeton) is the top seed of 39 players on the women's side. Anastasia Rybka is the top Ram in the draw at No. 5. On the men's side, Texas Wesleyan's Zhe Feng is the No. 1 seed amongst 74 athletes.

Then there is the coveted team competition. Three rounds of pool play will place teams in a progressive knockout bracket.

This is single-elimination competition with consolation matches played to decide final placement. Each team match features four singles and one doubles match. These individual matches are played best 3 of 5 and the first team to win three matches moves on.

The Lady Rams are seeded third out of 14 teams behind Princeton and California. The coed competition features 24 teams with the Rams seeded No. 1, closely followed by rival Mississippi College.

Last year, the Rams took the coed team and men's doubles (Zhedi Bai, Razvan Cretu) titles. The team competition came down to an epic 3-2 match with Mississippi College and a thrilling doubles win from Yahao Zhang and Emil Santos.

Mississippi has been the runner up in each of the last two seasons. The Choctaws have defeated the Rams in team competition at the regional level (2014).