Have you seen any ghosts on campus lately? 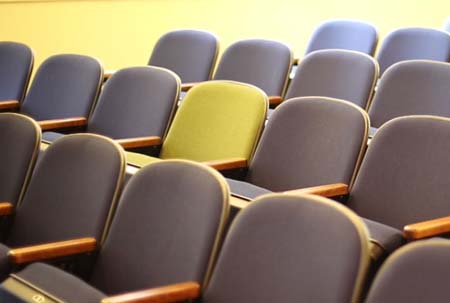 Ghost stories always pop up around Halloween, but they’re always in season at Texas Wesleyan. We’ve even had ghost tours to show where they hang out on campus.

The most famous of the ghosts is Georgia, the ghost of Martin Hall. You may have noticed a lone green seat among the blue ones. That’s for Georgia. You could sit there, but do you really want to risk it?

Boyd House, the oldest house in the Poly area, is rumored to be haunted. Legend has it that security sometimes sees a light on the second floor at night. When they go in to investigate, there are no lights on. Some have even said they’ve seen a young girl standing in the window. Joe Brown, dean of freshman success and ghost aficionado, said the original Boyd family had a young daughter.

Dan Waggoner Hall, which was once a men’s dorm, is believed to be haunted by someone who was killed in World War II. Have you ever heard him running up and down the stairs at night?

Even the Eunice and James L. West Library has been rumored to be haunted since it opened. Before the library was built, old army barracks were in that spot. During World War II, the barracks were turned into temporary classrooms.