Learn more about the Chisholm Trail Parkway at the library 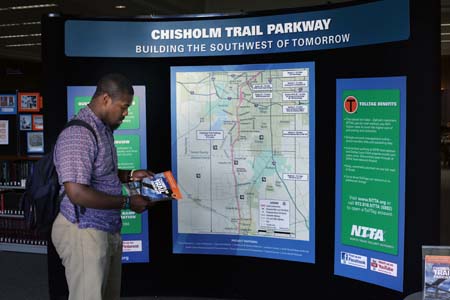 At this point, most drivers see the Chisholm Trail Parkway as the source of traffic detours. But soon the project will be complete and North Texas will have a new toll road to ease traffic congestion and allow for quicker commutes.

“I promise you a light at the end of the tunnel is coming,” Elizabeth Mow, assistant executive director of infrastructure with the North Texas Tollway Authority, said in the Fort Worth Business Press.

Construction began in December 2011 for the toll road that will connect southwest Tarrant County and northwest Johnson County, and will offer an alternate north-south route for travelers on Interstate 35W.

In conjunction with the construction, a traveling exhibit is helping educate residents about the project. If you’ve been to the Eunice and James L. West Library lately, you’ve seen it – front and center at the main entrance.

The 10x10-foot exhibit, which will be on display through Nov. 11, shows a map of the area and details about the project, which is expected to be completed in the spring.

“We are delighted to have received an invitation to display the Chisholm Trail Parkway exhibit in the West Library for all to see,” Deborah Roark, who handles government and community relations, said. “Given our large commuter population and the fact that so many of our students are from communities in Tarrant County, we want to do our part in sharing information about new travel corridors that will make the commute to Texas Wesleyan much easier.”

Everyone is somewhat familiar with the corridor project, but here are some details you may not know.

If the name sounds familiar, you might be thinking of a Texas history lesson about the Chisholm Trail. But that one is about cattle drives that began in Texas – because that’s where the longhorns were – and went into Kansas and beyond.

Texas Wesleyan University
At Texas Wesleyan, we have a rich history and a Texas-sized reputation. As stewards of the University, it is our responsibility to build a future as bright as our past.
Upcoming Events
Oct
6
Ballet Folklorico Showcase
Oct
7
Ram Club Luncheon
Oct
8
TXWES football vs. Southwestern Assemblies of God University
Oct
11
Gratitude Workshop
Oct
11
Hybrid Town Hall
Oct
13
Wesleyan Singers Perform with Arlington Heights High School