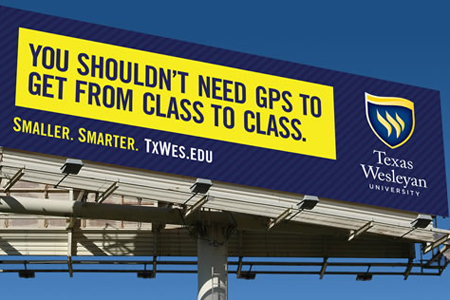 President Slabach will give an update on the impact of the 2012-13 marketing campaign and reveal new TV commercials and billboards from the 2013-14 campaign.

The event is open to faculty, staff and students, and will last approximately one hour.

Last year, Texas Wesleyan University unveiled its first-ever comprehensive marketing campaign, “Smaller. Smarter.” The successful campaign reached nearly one million Metroplex TV viewers on channels like NBC, Fox, CBS, ESPN, MTV and ABC Family. The outdoor advertising campaign reached more than half of all drivers in the Metroplex, one of the nation’s most car-friendly regions.

The campaign, which uses the tagline “Smaller. Smarter.” employs bold, playful slogans like “You In The Back Is Not Your Name” and “Big Schools Are Just Not That Into You” helped Texas Wesleyan make the largest increase in awareness among all benchmark institutions in the Dallas-Fort Worth area over the course of the last year, according to a report from Student Insights.

The same report also noted an increase in perception and awareness scores in Dallas County, a region the campaign specifically targeted.