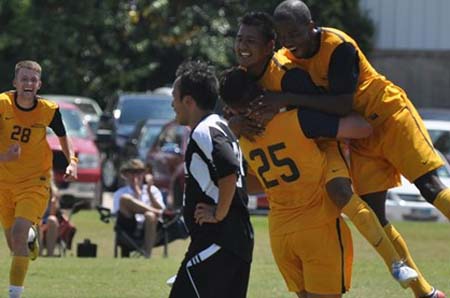 The Rams home crowd was treated to a 2-0 victory in the season opener as the men's soccer team topped Concordia University Texas at Martin Field.

The Rams survived a penalty kick in the seventh minute as Arnold Martinez came up with a huge save. Six minutes later, the Kovacevic brothers connected for the first goal of the season. Marin Kovacevic found his older brother Ivan Kovacevic with a cross and Ivan found the back of the net from the right wing.

The score remained 1-0 through the half as Concordia kept the pressure on by outshooting Texas Wesleyan 9-5 in the period. The Rams turned the tables with a 13-2 shot count in the second half.

Hector Vargas capped the scoring at 2-0 with a score in the 69th minute.

The Rams will return to action at 5 p.m. Friday, when they host UT-Brownsville at Martin Field.

The Lady Rams kept the pressure on their opponent, outshooting Howard Payne 15-2 in the first half and 23-4 in the game.

Kaitlin Bush, a sophomore transfer student, netted the first goal of the season in her first game with the Lady Rams. Bush scored unassisted in the 20th minute. Eight minutes later, Bush found Alexis Michaelkovich for another score. Lauren Kee made it 3-0 with a goal off an assist from Shrareh Asadi in the 30th minute.

Asadi found Kee again in the 66th minute to cap the scoring at 4-0.

"We had some bright moments," Head Coach Josh Gibbs said. “But you could tell it was our first real game of the year. We have some work to do, but I'm pleased with where we are."

The Lady Rams will host LeTourneau University at 7 p.m. Friday at Martin Field.