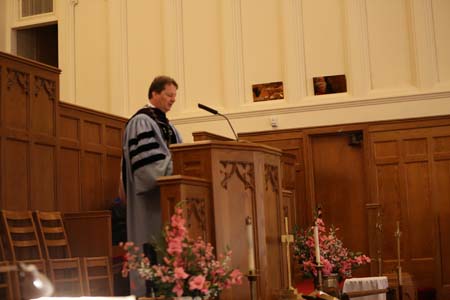 As Texas Wesleyan celebrated the new school year with the annual academic convocation, President Frederick G. Slabach reflected on the past and talked about the many positive developments on campus — both now and looking forward.

The $6.5 million Rosedale Renaissance capital campaign, for example, has reached 93 percent of its goal and is well on the way to completing the largest fundraising endeavor the University has had in many years, he said. The project, which will transform the neighboring area, has been supported by many individual, corporate and foundation donors.

"We expect completion of the goal by Oct. 1," Slabach said.

Our institution started with just one building, and had only been established three years when the Panic of 1893 struck. That was the first of many tough economic times. Slabach said there was a time during the Depression era when students paid tuition in meat and produce while faculty sometimes ate that food while living for free on campus.

When the recession came in 1980, universities saw dips in funding and enrollment. More recently, some small private colleges, like Lon Morris, have closed.

"When faced with adversity and challenges, we persevered," Slabach said.

And as the University approaches its 125th anniversary in 2015, a commemorative book is in the works to capture the institution’s history.

Slabach concluded his address about where Texas Wesleyan is heading by referencing William Faulkner, who received the Nobel Prize for Literature in 1949.

"To paraphrase Faulkner, Texas Wesleyan will not only endure, but will prevail."