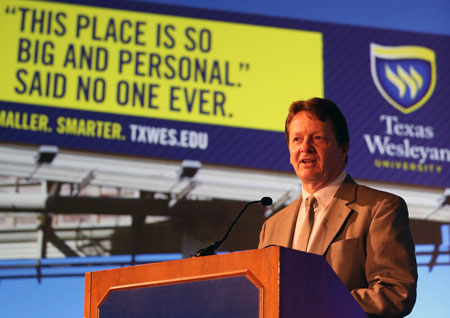 The new series of Texas Wesleyan television commercials and billboards launched Monday, Sept. 16, and can now be seen throughout the Dallas-Fort Worth metroplex.

University President Frederick G. Slabach showed the campus a sneak preview of the ads last week, and gave faculty, staff and students reason to be excited about what they'll be seeing on the airwaves and the highways throught the next 12 months.

"We've come a long way from our disclaimer of 'you've probably never heard of it' to 'Smaller. Smarter.'" said Slabach. "With our continued efforts to establish a strong market position, Texas Wesleyan is going to keep moving forward."

The new campaign includes six new television commercials, five new billboards and a strong Web advertising presence. The television ads, which are expected to reach more than 1.3 million 18- to 24-year-olds and 3.8 million 25- to 54-year-olds, will air on both broadcast and cable networks, including NBC, CBS, Comedy Central and MTV. They will also be seen by approximately 1.5 million moviegoers in Dallas-Fort Worth theaters.

In addition to the commercials, the new billboards will be strategically positioned throughout Dallas-Fort Worth to reach more than 3 million metroplex residents.

You can view the campaign in its entirety on YouTube and the Texas Wesleyan brand website, and can leave your thoughts on the commercials on the university's Facebook page.

The new ads feature sayings that build on the success of the first "Smaller. Smarter." campaign. "101 should be a course number, not a class size" and "When they say you’ll go far, it shouldn’t mean the hike to class" are just two of the six new messages designed to engage prospective students. Also debuting this year are:

In addition to the new slogans, the popular "'You in the back' is not your name" will remain in the billboard rotation for another year.

According to data gathered by Student Insights, last year's campaign registered the largest increase in awareness among all Dallas-Fort Worth based institutions, including UNT and UT-Arlington, and led to a 209 percent increase in applications from Dallas County.

"That's an impressive list of awards," said Slabach, "and according to the test groups that have seen this new crop of commercials, they say these are even better."