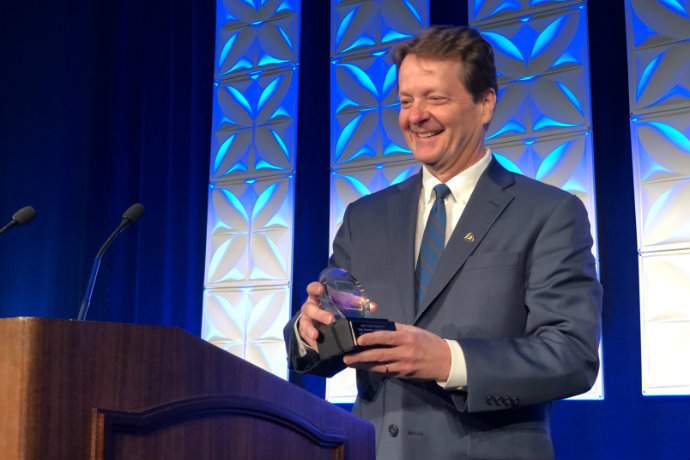 The award was presented to President Slabach during a ceremony on Feb. 25 at the CASE District IV Annual Conference at the Gaylord Texan Resort & Convention Center in Grapevine.

It is the highest honor bestowed by the organization, recognizing an outstanding leader in the district, which includes Arkansas, Louisiana, New Mexico, Oklahoma and Texas.

“Fred Slabach exemplifies what we seek to lift up with this award,” Jim Lewis, vice president for advancement at Texas Wesleyan and CASE International and District IV trustee said while presenting President Slabach with the award. “He is the embodiment of servant leadership.”

Congratulations, President Slabach, and thank you for your hard work, vision and dedication to Texas Wesleyan! 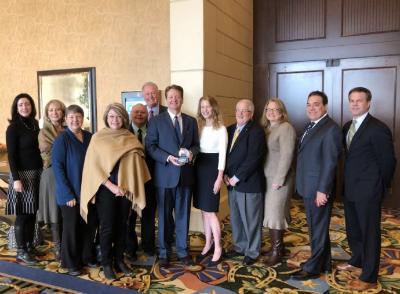 CASE District IV is the chapter of the Council for the Advancement and Support of Education representing 2904 members from 261 institutions in Arkansas, Louisiana, New Mexico, Oklahoma and Texas. It was formally incorporated on July 10, 1975.

CASE IV is a leader in providing resource development, training programs and marketing services in the areas of alumni relations, communications, and philanthropy. Through its programs and services, CASE IV promotes diversity within the advancement professions and provides networking opportunities. It is a strong force for the advancement and support of education for our entire District.

Since assuming his role in 2011, President Slabach has made a profound impact on the university and surrounding community. Under his leadership, Texas Wesleyan developed the Rosedale Renaissance, a nearly $40 million project that leveraged federal, state and local funding, as well as university fundraising, to revitalize the campus and the surrounding neighborhood. The project continues to thrive with the opening of a new restaurant, Ben’s Triple B, later this spring.

In addition to the Rosedale Renaissance, the university has made another $23 million in capital improvements to campus, and the endowment has doubled. Overall enrollment has increased more than 15 percent. In 2017, football returned to Texas Wesleyan for the first time in 75 years and the number of residential students is at an all-time high. Next fall, Texas Wesleyan will open the $20.25 million Nick & Lou Martin University Center. The fully-funded student center is the most significant capital improvement project at Texas Wesleyan in a century and a result of generous donors.

President Slabach took a bold stance at the beginning of his presidency to make an immediate investment in marketing to raise the awareness of Texas Wesleyan. The first year of the “Smaller. Smarter.” marketing campaign resulted in a 96 percent increase in applications and has now garnered more than 100 advertising awards.

He has helped the university develop and execute new, innovative online academic programs and established the School of Health Professions. He has grown the university’s extraordinary community involvement with programs that support education for K-12 students in the areas of reading, STEM, early college high school and college preparedness.

President Slabach received his LL.M from Columbia University School of Law, his J.D. from the University of Mississippi School of Law and his B.S. from Mississippi College. He is married to the Pulitzer Prize-nominated author Melany Neilson. They have twin sons and a daughter.