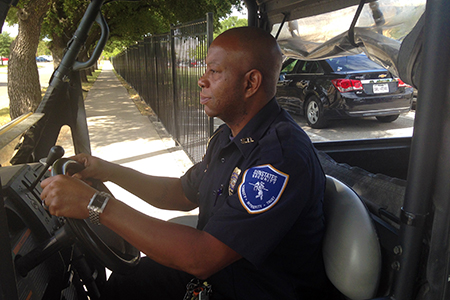 When President Frederick G. Slabach announced the 2020 Vision strategic plan in 2013, campus security was identified as a priority.

Just two years later, major strides have been made. There are updated security protocols, a new security company, a network of security cameras, upgraded lighting across campus and improved monitoring of access to student housing.

"Since our cameras and fences have gone in, there has been a noticeable reduction in the number of incidences in residence halls and parking lots," he says, adding that some of this is attributable to support from administrators. "The Dean of Students and the Student Life staff have contributed to crime rates going down by working with the hall directors and resident assistants to raise awareness."

"Most incidences could have been prevented if someone who sees something, says something," he says. "Anything minor or out of the ordinary needs to be brought to the attention of campus security. It takes the whole community to make a safe community."

Last March, the University signed a contract with Sunstates Security, a security guard service based in N.C. They will provide five officers around the clock to patrol the campus, including the expanded campus south of Rosedale Street. These uniformed officers received additional training and have extensive qualifications in emergency management and safety.

Texas Wesleyan will augment its five full-time, around-the-clock security personnel provided by Sunstates with the addition of three full-time security officers employed by the University this fall, pending state approval, so that there is University-employed security staff on campus at all times. The Texas Wesleyan employed officers, unlike Sunstates Security, will be armed and all will patrol in uniform.

Bumbard says the University is looking for police officers with extensive investigative experience in major crimes and sexual assault to fulfill federal safety requirements for campuses. He expects these officers to be on campus by the end of the semester (pending state approval).

Thirty-eight security cameras were added across campus this year and 10 emergency call boxes are being installed this semester. Each features a blue beacon and call box that is connected to the security office. They will be installed outside each residence hall, in parking lots and areas of high traffic.

Electronic gates and wrought iron fences surround each housing complex and parking lot and limit access to those with key cards. Campus entrances were upgraded with new fencing and the Wesleyan Street entrance is card accessed.

Stella Hall has new doors, and the west entrance has a safety alarm to alert security when the door has been propped open.

All exterior lighting was fitted with LED bulbs that are cleaner and brighter. Additional lights were added to parking lots and other areas on campus.

Broken sidewalks were replaced throughout campus as well.

To learn more about campus security, go to txwes.edu/security.