Welcome new faces to the Office of Advancement 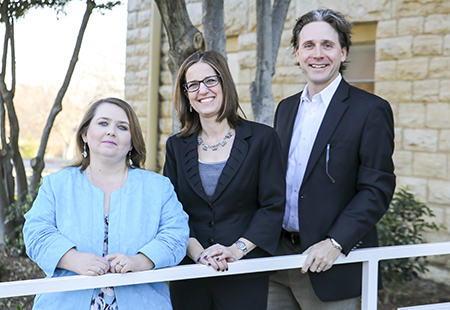 Jim Lewis, the new vice president for university advancement, is building an advancement team aimed to significantly increase Texas Wesleyan's philanthropic support and constituent engagement. Three new staff members, all of whom worked on his staff at the University of Texas at Arlington (UTA), have joined Wesleyan this month in key staff positions.

Farrell joins Texas Wesleyan as Senior Director of Sponsored Programs and Foundation Relations. He came from UTA where he served as director of foundation relations, and has a rich background in both private philanthropy and public administration, including a stint as the city manager of Jefferson, Texas and work at Americans for the Arts in Washington, D. C., University of the Sciences and Drexel University in Philadelphia. He is also a former VISTA volunteer.

"Shawn brings an unusual blend of experiences which allow us to bring grant development aimed at both government entities and private foundations under one office," Lewis said. "He has a special talent for working with faculty to develop strategic, focused cases for academic programs."

"Vanessa's leadership of advancement services will strengthen the work of our entire fundraising team, by systematizing and significantly increasing the pool of major gift prospects," Lewis said. "She brings an extraordinary depth of experience in the area of prospect pipeline development, a role she played in a major campaign during her time with Mississippi State."

"Prospect research is an art form which Roni has honed over a distinguished career with several North Texas philanthropic organizations," Lewis said. "Our major gift development efforts will be greatly enhanced by her contributions."

Texas Wesleyan University
At Texas Wesleyan, we have a rich history and a Texas-sized reputation. As stewards of the University, it is our responsibility to build a future as bright as our past.
Upcoming Events
Jan
18
Weekend program classes do not meet - University closed for MLK, Jr. Day
Jan
20
Martin Luther King, Jr. Day; University closed
Jan
21
Last day to add or register for Spring 2020
Jan
22
T.I.L.T. assignments for student success, 1/22
Jan
23
T.I.L.T. assignments for student success, 1/23
Jan
24
Dr. Don Meichenbaum