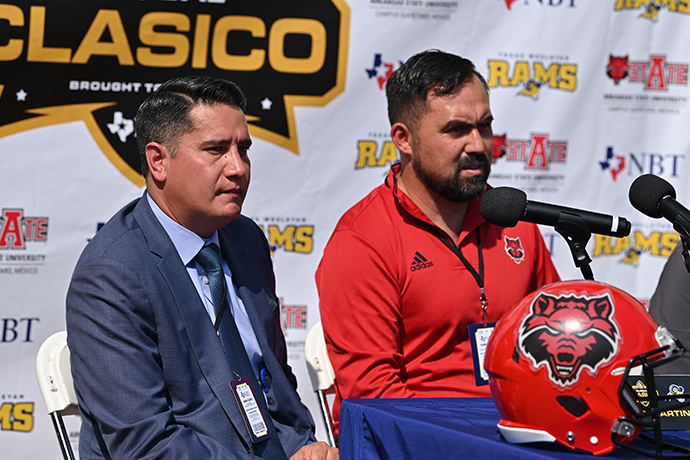 Texas Wesleyan football kicked off the season with a historical event when they hosted Arkansas State University — Campus Quetétaro in the inaugural Global Clasico. The event was spearheaded by TXWES alum Hugo Martinez '01 JD '04.

"The Global Clasico was an opportunity to not only celebrate two great cultures but to highlight the amazing Texas Wesleyan football program," said Martinez. "As a university alumnus and a Mexican American, getting to be a part of such an amazing event, just weeks before Hispanic Heritage Month, was truly special."

"Hispanic Heritage Month is a great reminder that Texas Wesleyan, like our nation, is a multicultural campus. It is something that Rams are proud of and embrace. My education at Texas Wesleyan prepared me for life after college by giving me the confidence to continue challenging myself, while teaching me the importance of making a difference. it is because of this that I attended law school and eventually decided to go into public service."

Martinez was raised in the North Side of Fort Worth and graduated from North Side High School in 1998. He then went on to earn an English degree from TXWES in 2001 and graduated from the Texas Wesleyan School of Law in 2004. He was an Assistant District Attorney for the Tarrant County District Attorney's Office from 2005 to 2010 and then served as an Assistant United States Attorney for the U.S. Attorney's Office for the Southern District of Texas until 2018. In 2018, he was appointed as a United States Immigration Judge in Fort Worth and in 2019 was appointed as the Assistant Chief Immigration Judge for Fort Worth.