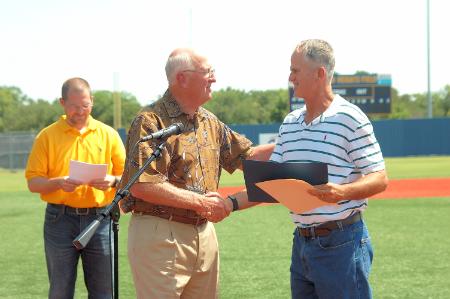 The ceremonies also included accolades from U.S. Representative Kay Granger and Fort Worth Mayor Betsy Price, and stories and mementos from colleagues, family and former players. In addition, Elliott received a bat signed by the former players in attendance and members of AHHS’ State 4A Championship baseball team of 1996.

Elliott joined the FWISD after graduating from Texas Wesleyan in 1976 with a B.A. in English. He credits his career success (730 wins – 305 losses) to former Texas Wesleyan Baseball Coach Larry Smith, whom he described as “a structured, stern disciplinarian” who helped a lanky, left-handed pitcher to understand what sports and winning the right way were really all about.

“He knew how to organize things,” Elliott said. “He had structure and organization and he did things the right way. And those are lessons that I tried to pass along to my teams.”