Did You Say Your Principal is on the Roller Skates? 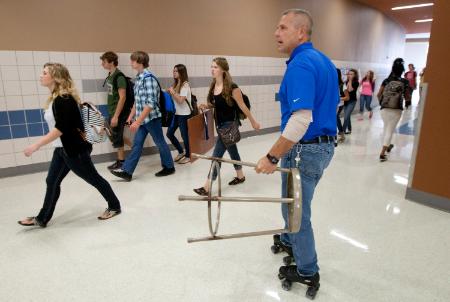 When Al Hemmle ’89 played third base at Texas Wesleyan, he fielded a variety of hit balls – bunts, popups, line drives, one-hoppers – with practiced ease and grace.

Today the 50-year-old principal at Midlothian High School might describe himself, in an infielder’s terms, as a slow roller, although that’s not entirely accurate.

During class periods, when the mallsized campus isn’t clogged with the foot traffic of 2,300 students, Hemmle will swing his arms and sway side to side, quickening his pace, and sail freely, happily, up and down the shiny linoleum-floored hallways.

Hemmle stays on his feet, most of the time.

But Hemmle is resilient, and not easily embarrassed.

For several years he patrolled the 540,000-square-foot campus on foot, logging up to six miles per day.

On skates he discovered he can go from one end of the school to the other – a half mile – in a fraction of the time it took him to walk.

Hemmle’s novel mode of travel reflects who he is – an efficient, energetic, slightly quirky educator on the go.

“I know it’s a bit unconventional,” Hemmle said. “But kids need to know that you don’t have to fit a certain image. Not everybody has to conform to the norm. You are who you are. Be yourself. Kids see me [on skates] and maybe think, ‘Hey, he’s not a stuffed shirt.’”

A former star athlete at Arlington Sam Houston High School, Hemmle received a baseball scholarship to Wesleyan. He played three seasons (1981-1983) under Rams coach Frank Fultz. Realizing his chances of playing professionally were slim, he dropped out of school, over the objection of his step-father.

Three years later, after working a variety of construction jobs, Hemmle had a heart-to-heart talk.

“What am I good at? What am I passionate about?” he asked the searching face in the mirror.

“Teaching and coaching are the same thing, in my mind.”

Hemmle returned to Wesleyan, married, and in 1989, at age 27, earned his undergraduate degree in physical education. He began his rewarding career in education in Midlothian as a sixth-grade science teacher and coach. After earning a master’s degree at Texas A&MCommerce, he then received his doctorate from Nova Southeastern University.

Hemmle served as a middle school principal and assistant superintendent before being named principal at Midlothian High School six years ago.

Summer before last, the principal opened a closet at the high school and found a pair of used roller skates. He tried them on. Surprisingly, they fit, like Cinderella’s glass slipper. As a youth Hemmle spent every weekend night at Big Wheel Skateland, where he and friends skated for hours.

Hemmle had this sudden brainstorm. Why not wear them at school?

When the father of three shared his plan with wife Kara, she gave him this you’re-joking-right? look. Kara Hemmle is an insurance/benefits specialist at the school district and handles workers’ compensation claims.

Hemmle never got to turn a double play in the major leagues, although he did face pitching great Roger Clemens in college – “I struck out three times.” But he is a happy man.

“This is the best job I’ve ever had,” said the principal, glancing at his pair of size 9 1/2 skates.

“Some people give me this funny look, but that’s okay. The older I get the less I care about what other people think. There is some freedom in that.”