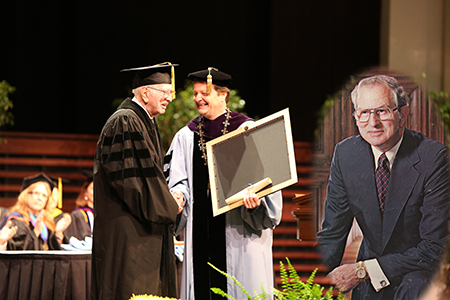 Dr. Judson A. Cramer, HON ’79, a member of the Texas Wesleyan Board of Trustees Chairman’s Council, received his honorary Doctor of Laws from President Frederick G. Slabach during the spring commencement ceremony. The inset photo is from the cover of a 1976 edition of Texas Wesleyan’s alumni magazine.

Cramer’s ties to Texas Wesleyan go back to his childhood, when he crossed campus each day on his Fort Worth Star-Telegram newspaper route. As a Polytechnic resident, he attended D. McRae Elementary School and Polytechnic High School.

Although he attended TCU initially, Cramer joined the service and enrolled at Texas Wesleyan as part of the Civil Pilot Training Program. He remained involved with Texas Wesleyan, joining the Board of Trustees in 1972 and becoming chairman in 1976. He was named Alumnus of the Year in 1975 and Business Hall of Fame Executive of the Year in 1983.