Top 10 headlines: See how the university made the news in 2014 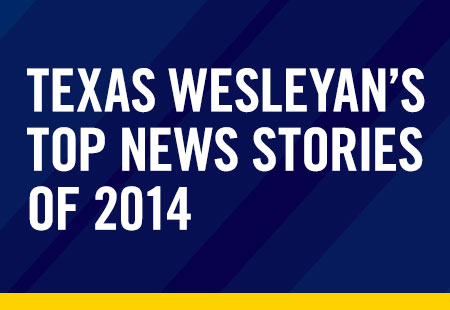 It was a big year for Smaller. Smarter. Texas Wesleyan’s brand awareness and perception levels continued to rise and culminated with the first 60-second commercial in the school’s history airing during Monday Night Football, which turned out to be the most widely watched MNF football game in four years. If you missed that game, chances are you probably saw the campaign on billboards on your way to work, at home watching TV or in the movie theater.

There’s also a good chance you read about or saw Texas Wesleyan in the news. Texas Wesleyan reached more than 10 million people in 2014 through news stories. From table tennis to the Rosedale Renaissance, the media had us covered.

What were the biggest stories of the year?

Every news station in Dallas-Fort Worth, plus some national media outlets, covered Texas Wesleyan’s legendary table tennis program last spring. The 11-time national champions were on NBC 5 Sports, WFAA news, Good Morning Texas, Fox Good Day and CBS 11. The Wall Street Journal even traveled to the national tournament to watch them play and wrote a front-page story about their success. Next spring they will be competing for the national championship again (against rivals at Mississippi College). We’ll be watching, will you?

Texas Wesleyan launched a new scholarship with partners at the Ben Hogan Foundation last year and the recipients were announced in May – the same month when everyone in the metroplex has the golf bug. NBC’s The Golf Channel and CBS’s KTXA Sports interviewed the scholarship recipients, partner representatives and President Slabach from the greens at the Colonial Invitational golf tournament. The Fort Worth Star-Telegram also interviewed partners at during the tournament and ran a story in the Sunday paper. Now that’s a hole in one!

This uniquely Texas Wesleyan tradition makes a splash every year, but in 2014 you could call it a tidal wave. The scuba program graduated Darlene Donaldson live on Good Morning Texas. NBC 5, CBS 11 and WFAA evening news also showed footage from the ceremony, which was captured with an underwater GoPro camera. For the first time, audience members in the Sid Richardson Center could watch the underwater action streaming live to a projector screen. Sources say Texas Wesleyan will do it again next spring.

Back-to-school trend stories started at Texas Wesleyan with the launch of Roompact, a new roommate technology created to help defuse conflict before it starts. The new trend was KERA’s top news story on Aug. 12. The Fort Worth Star-Telegram and WFAA also covered the program, which was further picked up by news outlets in Waco and Austin. Texas Wesleyan was the first school in Texas to try to new technology, and it gave the media something to talk (and text) about.

The announcement of the business school’s newly achieved accreditation by The Association to Advance Collegiate Schools of Business (AACSB) International put Texas Wesleyan’s School of Business Administration on the map. Accreditation by AACSB is earned by less than five percent of the world’s business schools and the DFW community welcomed the news with praise for Texas Wesleyan. Headlines ran in the Fort Worth Star-Telegram and Fort Worth Business Press. The Dallas Morning News even covered the story in their “Biz Beat Blog” – which put the announcement in front of the Dallas business community, too.

Updated articulation agreements with Tarrant County College and a new transfer scholarship that offers free tuition to qualifying students was covered by the Fort Worth Star-Telegram and Fort Worth Business Press. The Star-Telegram interviewed President Slabach for the story, and editors from the paper wrote an opinion piece for the wide-reaching Sunday paper with the headline, “Texas Wesleyan continuing to find ways to advocate for students.” The program has already beaten expectations with nearly triple the number of transfers on the scholarship this fall.

You can’t drive by campus without seeing the Rosedale Renaissance in progress, and it’s doubtful there are any Fort Worthians who have not heard about what is underway. A front-page story ran in the Fort Worth Star-Telegram, updating the community on the projects. The Fort Worth Business Press ran an editorial from President Slabach about Texas Wesleyan’s 2020 Vision, as well as several other stories covering everything from the new shopping center purchase, to Dora’s renovation and landscaping improvements.

Texas Wesleyan’s $6.2 million energy conservation plan put our facilities team in top news stories once again this fall. The plan, which significantly reduces energy waste and promotes environmental stewardship, was featured in the Fort Worth Star-Telegram and Fort Worth Business Press. It was the top story in the Business Press’s e-newsletter on Nov. 14.

At the recommendation of Texas Wesleyan’s student government, administrators announced in August that Texas Wesleyan is “stamping it out.” WBAP News Talk, KXAS Channel 5 and the Fort Worth Star-Telegram all covered the announcement – putting this important policy in our top 10 news stories of the year.