Texas Wesleyan Students in the Spotlight 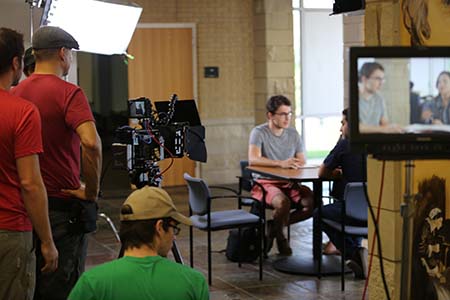 Did you see a whirl of activity last week and wonder what was going on with all of that camera equipment?

What you saw was a production crew moving around campus and shooting scenes for our upcoming commercial series, which touts our tagline: Smaller. Smarter. More than 60 cast and crew members were on hand to make sure the nine-hour shoot went off without a hitch.

Planning for the commercial shoot took months, and much more work is to be done before the commercials start running in September. There will be six versions – each lasting 15 seconds – and they will appear on network and cable TV stations. Each commercial will be fast-paced and visually appealing – much like the previous set of commercials.

Between now and then, the videos will be edited and more audio (voiceover, music, sound effects) will be added. Keep an eye on the website for the finished commercials.