Join TV commercial watch party and get a free t-shirt 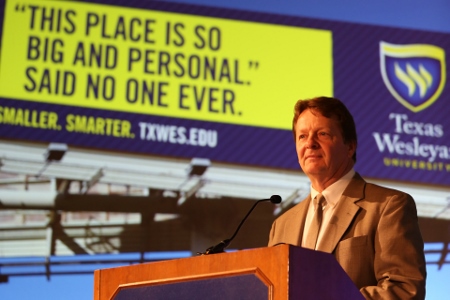 Join President Frederick G. Slabach as he kicks off this year's "Smaller. Smarter." advertising campaign with a special sneak preview screening and free T-shirt giveaway at 12:15 p.m. on Wednesday, Sept. 10, in Martin Hall.

President Slabach will also share the first glimpse of a top-secret advertising project scheduled for release in late October.

"Year three represents a significant and positive evolution for the Texas Wesleyan brand," John Veilleux, Vice President of Marketing & Communications, said. "I believe we have something special on our hands this year — these ads are going to get noticed in the marketplace."