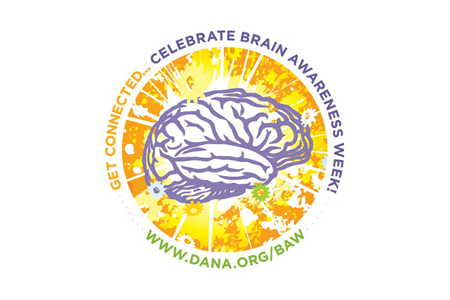 Get a jump on Brain Week with Texas Wesleyan and Mitchell-Reid Community of Learners Lecture series.‌

We invite you to join West Library and the School of Natural & Social Sciences in celebrating Brain Awareness Week (BAW). This campaign is spearheaded by Dana.org whose goal is to increase public awareness of the progress and benefits of brain research.

His topic will be "On moving better: strategies to treat locomotor impairment."

Dr. Salvatore will present his work from the past 4 years to highlight several intervention strategies in Parkinson’s and aging models,  each of which showing evidence of diminishing locomotor impairment. A central theme of these interventions is what these interventions are doing to tyrosine hydroxylase and dopamine regulation in the substantia nigra of the nigrostriatal pathway. For decades, most work to tackle the problem of locomotor impairment in Parkinson’s disease and aging has focused upon tyrosine hydroxylase and dopamine regulation in the striatum of this pathway. However, incongruity between changes in locomotor function and any changes in the striatum from a number of studies have prompted them to evaluate whether the changes in the substantia nigra may be sufficient to control locomotor functions to an extent larger than previously thought. Two of these promising interventions, exercise or diet modification, are particularly exciting because of their translational potential to human lifestyle modifications that can decrease risk of locomotor impairment with aging.

Refreshments will be provided by the Provost's office.

Biography: Dr. Michael Salvatore grew up in northeastern Ohio near Cleveland in a small town called Olmsted Falls. He received my BA from Ohio ‌Wesleyan University in 1988 and worked in academia and industry for seven years prior to moving to New Orleans to pursue his doctorate in neuroscience at LSU Health Sciences Center-New Orleans under the direction of the late Dr. John Haycock. In 2000, he then moved to the University of Kentucky in Lexington to do postdoctoral work in aging and Parkinson’s related work with Drs. Greg Gerhardt and Don Gash. His first tenure track position as assistant professor at LSU Health Sciences Center-Shreveport in the Department of Pharmacology, Toxicology, & Neuroscience in 2006, where he was promoted to Associate Professor and also received his first R01 from the National Institute on Aging to study the role of tyrosine hydroxylase function in aging-related bradykinesia. In January 2015, He relocated his lab to University of North Texas Health Science Center in Fort Worth and now have expanded their research goals in the Institute for Healthy Aging under the direction of Dr. Michael Forster. Their work has been centered upon determining the mechanisms of dysfunctional dopamine and glutamate regulation in locomotor impairment and determining ways to prevent or treat such impairment through these mechanisms.

In Dr. Michael Salvatore's spare time, He enjoys playing classical piano, spending time with his family and mountain biking. He also enjoys art, especially works from the Impressionist and Romanticism periods, and the wealth of classical music performances here in Fort Worth.