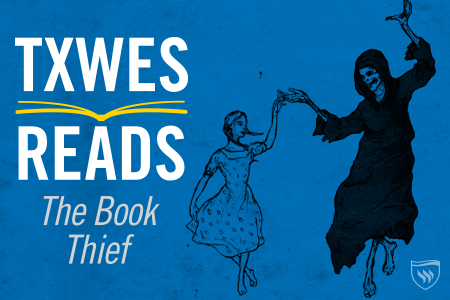 West Library is sponsoring TXWES Reads again this year. This year’s book is The Book Thief by Markus Zusak. The purpose of the TXWES Reads program is to bring the Texas Wesleyan community together and to encourage students, staff and faculty to join together to read and discuss the same book.

The official kick-off of the program will be Oct. 8 during free period on the patio in front of the library. There will be guest readers presenting quotes from the book and as well as interesting facts about the author. On Nov. 12, Brenda Matthews will do a program on the historical background on The Book Thief.

The Book Thief was published in 2005 and became an international bestseller, was translated into 63 languages and made into a movie in 2013. It was nominated as one of America’s best-loved novels by PBS’s The Great American Read.

Why should you read The Book Thief? A reviewer in Kirkus Reviews called it “elegant, philosophical and moving … beautiful and important.” Another reviewer on Quora said, “What at first appears a whimsical gimmick—having the story narrated by Death—actually turns out to be crucial to making the book work.”