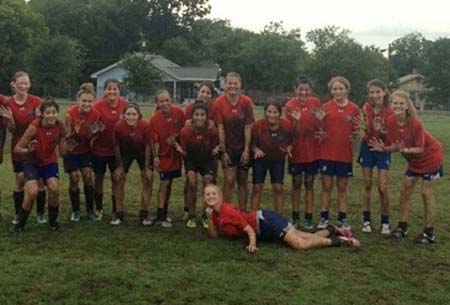 The children, ages 10-15, were on campus for part of a soccer skills summer camp that was hosted by the men’s soccer team.

Campers and staff encountered the very unusual week of isolated showers, but persevered to work on skills training, speed and agility training, team building, and fitness activities. Campers worked through three or four skill sessions a day to hone and sharpen their soccer prowess.

"This year's camp was a huge success," Tyler Powell, head coach, said. "We had to improvise and be very flexible because it rained every day, but that made it as cool as you can ask for in July. We had 30 people at last year's camp and over 70 this year. I can't thank the staff enough for all of their hard work and efforts this week."

The Rams will start their season with two exhibition matches against Richland on Aug. 13 and Hill College on Aug. 17, before kicking off the 2013 season with a home opener against the University of Concordia-Texas. The match is set for 1 p.m. Monday, Aug. 26, at Martin Field.