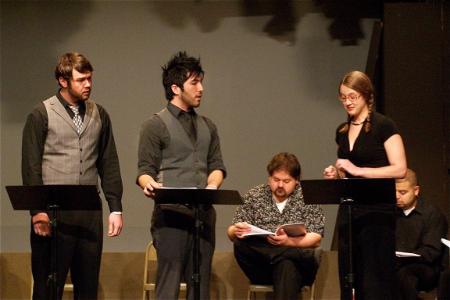 Theatre Wesleyan’s Playmarket has been part of the regular season since 1999 and has showcased more than 20 original scripts, both on campus and in New York.
Last year, the opening production of the 2011-2012 season was Lycanthrope by alumnus Chuck Fain ’11, the 2011 Playmarket winner. Lycanthrope was first presented as a reading in New York and then given a full production on campus during the fall semester.

This year, Theatre Wesleyan is continuing its tradition of showcasing original work by students and alumni with two productions. Certificate of Death, by alumnus Walter Wykes ’92, was presented this fall in the Thad Smotherman Theatre. This original script was the winner of the Wesleyan Playmarket in 2009 and initially received a reading at Rattlestick Playwrights Theater in New York’s West Village. The production on campus featured student actors, designers and technicians and was directed by theatre Professor Connie Whitt-Lambert.

The search for the 2013 winning script, which will be the second production, is currently under way. Students and alumni submitted scripts through Nov. 15, and the winning script will be announced in March 2013. This original script will then be presented by the theatre department in New York in May.

For more about Theatre Wesleyan’s Playmarket, please visit the department’s website at www.txwes.edu/playmarket.