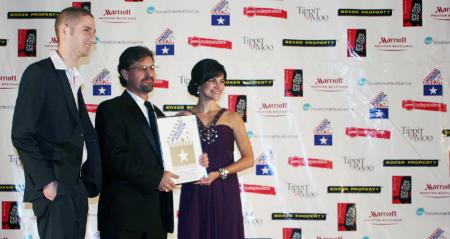 You can read more about the making of part two in an interview with Hanshaw.

Hanshaw’s four-student crew filmed on location in Konya, Turkey, and India (including student Micah Brooks, who is pictured with Hanshaw above at the festival). The film is the second part in a multi-part series. Part one, The Ritual Life in India, won a Bronze Remi in the last year’s WorldFest festival.

“To travel in India and Turkey with students was an unforgettable experience,” Hanshaw said. “Our small crew visited some amazing locations.”

Platinum is the highest award given to films. More than 4,200 films were entered in the entire festival. The film will also be entered in an invitation-only film festival in Seoul, Korea.

“We were very excited to be given this honor,” Hanshaw said.