Singing in the International Language 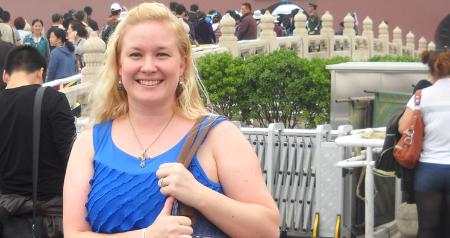 Emily Maples-Davis, sophomore music major, can’t help but smile as she talks about the last year.

She made great grades – all “As” last semester – and when she auditioned for the music department, they recognized her impressive talent and asked her to join the Wesleyan Singers, both as a singer and as a piano accompanist.

She’s performed on campus at events for the inauguration of President Frederick G. Slabach and University College Day, to name two.
It’s been a good year, she says. Returning to school after years of teaching private lessons has changed her life, and taken her places she never thought she would go.
Like, for instance, China.

Maples-Davis was one of 28 students and two professors who traveled to Guiyang, Guizhou Province, China, with the Fort Worth Sister Cities delegation in mid-April. Mayor Li Zaiyong personally invited the group after hearing them at the official Sister Cities signing in Fort Worth.

The experience was unforgettable from the moment they stepped off the plane in Guiyang, Maples-Davis says. “I felt excited for Texas Wesleyan that we could be ambassadors,” Maples-Davis said.

Local press interviewed her. Dignitaries welcomed the group.“It was incredible,” Maples-Davis said. “It was unreal.”
The choir performed twice. During the first performance, they did the “Star-Spangled Banner,” in a unique arrangement created by Jerome Bierschenk, professor of music.“There were tears streaming down my face,” Maples-Davis said. “I felt moved in a way I have never felt about our national anthem – I felt such pride representing both America and Texas Wesleyan.”
At the evening citywide concert, the Guizhou University Choir joined the choir to perform Dvorak’s “Going Home.” Once again, Maples-Davis noticed tears in her eyes.“To hear them sing in English,” Maples-Davis said. “It really touched me. It felt like a true meeting of cultures.
“It’s a moment I will never forget. If I hadn’t come back [to school], I wouldn’t have had this experience.”

A Bridge to All Cultures

Traveling abroad, and seeing the impact of music – a language that bridges all cultures – was a learning experience that Maples-Davis treasures. “It helps you acknowledge and understand the respect that all people are due,” Maples-Davis said.
The students bought gifts for John Fisher, music department chair, and Bierschenk, to commemorate the trip and the professors' impact on their lives. Bierschenk’s gift was a wall hanging of the four seasons in China – a reference to Vivaldi, of course.
“As a returning student, I know where my limits are and I am excited to see those limits broken down,” Maples-Davis said. “In the first year, I can already see how I’ve improved academically and musically.”
It’s safe to say the trip – and Texas Wesleyan, have made quite an impact on Maples-Davis.
"I’m so impressed with the instructors here – I’ve become the biggest advocate for Texas Wesleyan,” Maples-Davis said. “In the small classes, you’re treated like a person – even my professors in my other classes ask me about my performances.”
Upcoming Events
Feb
2
Black History Month Kick-Off