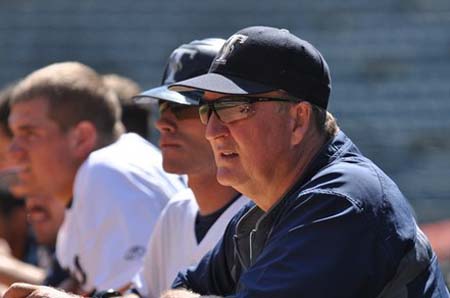 Texas Wesleyan Baseball Head Coach Mike Jeffcoat has been named to the Southland Conference’s All-Decade Baseball Team for the 1970s. Forty star athletes were named from the eight institutions that were in the conference at that time.

"It's such a great honor that the Southland Conference has gone back and named me to the all-decade team," said Jeffcoat. "There are a lot of great names on that list and to be on it is just an honor. The conference only had six schools when I was playing, but it was tough."

Of those named to the team, Jeffcoat is the only player who went on to play in Major League Baseball (MLB). He was drafted by the Cleveland Indians in 1980, starting his 11-year MLB career. Jeffcoat also played for the Giants, Marlins and six years with the Texas Rangers. He posted a career 4.37 ERA and was the first American League pitcher since the inception of the designated hitter rule in 1973 to record an RBI in a regular season game.

During Jeffcoat’s freshman season with Louisiana Tech, the Bulldogs had a 40-win season and only needed one win to secure a conference title as they headed into the final series with Lamar University. The Bulldogs lost the first two games rather badly.

"The team was a little down that morning at breakfast, and I thought, “We have nothing to lose. We only need to win one game and we have two games to do it." So I told our sports information director to not be afraid and call a no-hitter today, not even knowing for sure if I was going to pitch the first game," Jeffcoat said. "I ended up starting the first game, and we won 1-0 in extra innings…and I threw a no-hitter."

He recounted that the team went on the regional tournament that was played in the park where he would eventually call home – the Rangers stadium in Arlington.

Jeffcoat will begin his thirteenth season as head coach of the baseball program and has the most wins in program history with 396.