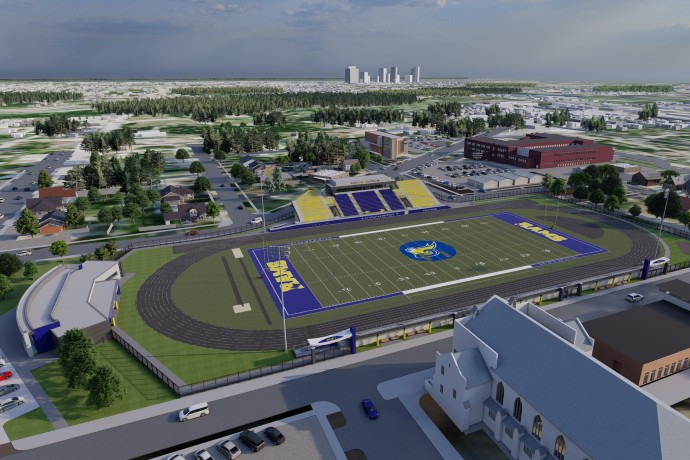 Texas Wesleyan University is delighted to announce that trustee and friend Karen Cramer has pledged a gift of $5 million to support the construction of a new stadium on Texas Wesleyan’s historic campus and named in her honor. Karen’s generous commitment is the first leadership-level gift received for the stadium project.

“Karen’s generosity exemplifies the kind of philanthropy that allows institutions like Texas Wesleyan University to continue to provide the environment of excellence that we strive for,” said Texas Wesleyan Board Chairman Glenn Lewis. “Mere words are not sufficient to express our gratitude.”

The $16.5-million stadium project, which will be located a block north of E. Rosedale Street between Binkley Street and Nashville Avenue, will be built in three phases: 1) practice field and lighting; 2) NCAA-certified track; 3) bleachers, press box, field house and concessions.

A Texas Wesleyan stadium has been in discussion since 2017, when football returned to the university after a 76-year hiatus. Now in its fifth season, Texas Wesleyan football has brought heightened media attention to campus, increased school spirit and bolstered both recruitment and diversity. But the stadium project will benefit more than football.

The stadium will be built on the western edge of campus, less than half a mile from Polytechnic High School. Fort Worth ISD could certainly benefit from this proximity. “The new stadium will positively affect all aspects of our Engage 2025 Strategic Plan by enhancing student, alumni and community engagement and spurring further economic development along Rosedale Street by bringing more people to our neighborhood,” said Texas Wesleyan President Frederick G. Slabach. “It also will generate a revenue stream to sustain our athletic programs through usage fees from outside organizations. We are excited about this development for our Polytechnic Heights community and incredibly thankful for Karen and her outstanding support.”

The new stadium will continue the economic development work started along E. Rosedale Street with the Rosedale Renaissance, renovated storefronts in the 3000 and 3100 blocks, the Nick and Lou Martin University Center and The Rosedale – a new $10.5 million private student-housing development scheduled to open in fall 2022 at E. Rosedale and Collard Street.

The Cramer Family has a long legacy at Texas Wesleyan. Karen’s grandmother, Quilla Viola Umstead Shawver, graduated in 1917 (then known as Texas Woman’s College). At age 15, Karen’s mother, Elizabeth Shawver began college at Texas Wesleyan majoring in Home Economics until the program was closed during WWII. She then transferred to and graduated from Southern Methodist University.

Karen’s father, Judson A. Cramer HON ’79, graduated from Polytechnic High School and enrolled at Texas Wesleyan as part of the Civil Pilot Training Program. He later joined the Texas Wesleyan Board of Trustees in 1972, was named Alumnus of the Year in 1975, and became board chairman in 1976.

Karen Cramer continued the family legacy by joining the Texas Wesleyan Board of Trustees in 2016. The new stadium will be named in her honor for her demonstrated commitment to Texas Wesleyan students and her incredible generosity.

“Texas Wesleyan is blessed to have Karen Cramer serving on our board and as an Honorary Chair for our Engage. Inspire. Invest. Campaign,” said Jerri Schooley, Vice President for Advancement. “Her calm commitment and keen intellect have served us well over the past five years, some of the most productive philanthropic years in the university’s history. It is champions like Karen who help make the university’s impact on students’ lives possible.”

Texas Wesleyan University
At Texas Wesleyan, we have a rich history and a Texas-sized reputation. As stewards of the University, it is our responsibility to build a future as bright as our past.
Upcoming Events
Dec
5
Senior Recital: Ryan Maxey, tenor