Which Building on Campus was a Grocery Store? 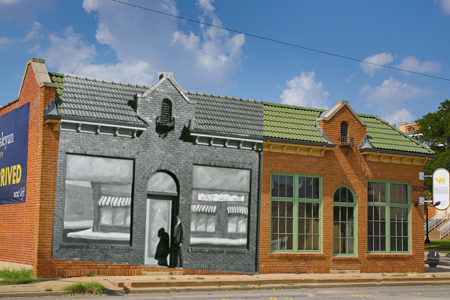 Historic buildings often have an interesting past, but few buildings have been used for so many purposes as the Maxine and Edward Lawrence Baker Building.

Located at the corner of Rosedale and Wesleyan, the Baker Building – as it is commonly known – began as a commercial building in 1927-1928 and was home to five businesses. Two of them faced Rosedale and the other three businesses faced Wesleyan Street. The first tenants included a dry cleaner, a grocery store, the First State Bank of Polytechnic and the Polytechnic Herald.

For more than 25 years, the building was used as a scene shop for Texas Wesleyan’s theatre department. Passersby would often see groups of students working on the next production – painting, building sets and organizing props.

In 2007, the building’s purpose changed again. A $1.2 million renovation of the 5,000 square-foot building transformed it into a community center. Part of the building is also used for offices and for Brick’s Bistro, a healthy eatery.

At the same time, construction began on the Claudia Stepp Scene Shop – a new home for the theatre department to create sets.

The building is named for Maxine and Edward Lawrence Baker, parents of Texas Wesleyan Trustee Louella Baker Martin. Ed Baker served as chairman of the Texas Wesleyan Board of Trustees (Texas Wesleyan College, at that time) and his father, James B. Baker, also served on the board beginning in 1894, when it was the Polytechnic College Board.

This is part of a series of historical postings related to the 125th anniversary of Texas Wesleyan University, which was established in 1890. New installments will be published twice a month and for six months.