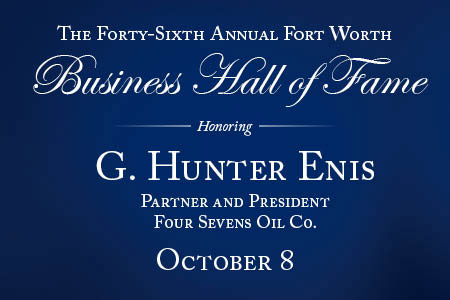 The 46th annual Fort Worth Business Hall of Fame will be held Thursday, Oct. 8, at The Fort Worth Club. This year's presenting sponsor is Capital One. The reception, which is co-sponsored by TTI, Inc. and Four Sevens Oil Company, begins at 6 p.m. and the dinner begins at 7 p.m. Dress is business attire.

Tickets for the general public are $250 each or $2,500 for a 10-person table. Texas Wesleyan University faculty and staff are eligible for discounted tickets. To make reservations, contact Adrian Bumgarner at 817-531-5806 or RSVP@txwes.edu.

Hunter Enis, partner and president of Four Sevens Oil Company, will be honored as 2015 Executive of the Year.

In his professional football career, his continued success in the energy business and his philanthropic efforts, Enis has been a model of leadership and excellence.

Enis, a Fort Worth native, graduated from Polytechnic High School in 1955. As a student at TCU, he earned bachelor's and master's degrees in geology and lettered in both baseball and football. In 1986, Enis was inducted in the TCU Letterman's Hall of Fame.

As TCU's quarterback and team co-captain, he led the team to the Cotton Bowl in 1958 and a Southwest Conference championship. After leaving TCU, Enis played professional football for three seasons and was a coach in both the AFL and NFL.

While many remember his heroics on the gridiron, many of Enis' biggest successes have been in his nearly four-decade career in the energy field. Along with Dick Lowe, Enis is a partner in Four Sevens Oil Company, a major player in the oil and natural gas business.

Enis is dedicated to betterment through education and research. He has served on the TCU Energy Institute's Board of Advisors and also founded the Hunter Enis Endowed Chair for Petroleum Geology at TCU.

He is a member of the American Association of Petroleum Geologists and was awarded the Legends Medal Award by the Texas Alliance of Energy Producers in 2009.

About the Business Hall of Fame

Enis will also speak to the Texas Wesleyan community at 9:25 a.m. Thursday, Sept. 17, in Martin Hall. Students, faculty and staff are welcome and admission is free.