The Relevance of Our Mission 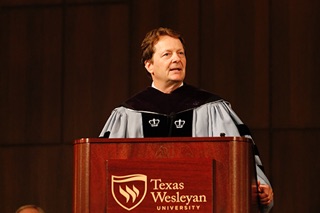 This is a prepared text of the Opening Convocation address delivered by Texas Wesleyan University President Frederick G. Slabach on August 23, 2016.

I have been thinking a lot about our mission lately. Perhaps because the university family has experienced so much personal loss over the past few months – the recent death of long-serving Board of Trustees leader, Dan Boulware; the recent passing of our reference librarian, Kate Wiant; and I know that I am not alone in the loss of my father and younger brother – many of you have experienced significant loss in your families. But, perhaps because of that loss, I have been thinking more than usual about the purpose of life, about the purpose of our university – our mission; our Methodist heritage – and our connection to the world and the issues outside our campus.

My faith tradition teaches that the purpose of life is to love, to learn and to serve.[3] And that is similar to our mission at Texas Wesleyan.

One of my favorite quotes is Martin Luther King’s version of abolitionist theologian Theodore Parker’s passage that “the arc of the moral universe is long, but it bends toward justice.”[5] I have always been impressed by the elegance of the imagery. My mind conjures up an eagle soaring steadily upward along a brilliant blue line then gliding gracefully toward the luminous horizon. The moral certainty – the inevitability – contained in the imagery is palpable.

I have a confession to make. I no longer believe it is inevitable.

What an odd thing to say to faculty and staff who are dedicated to developing students to their full potential as individuals and as members of the world community; and to students who are committed and passionate about the future. But you are precisely the group that I must tell – you who spend your lives serving this public good.

My reading of history and my own experience has convinced me that progress toward justice is neither elegant nor inevitable – merely possible.

We have seen the pendulum of justice swing back and forth from decade to decade and at times appear to swing in both directions at the same time.[6] The international spasm of cynicism and hate which has produced the effluvia of terrorism and violence and its backlash of excessive use of force, racism, misogyny, homophobia, and religious intolerance are only the most recent examples of this equivocation.

We have all been thinking about the recent shootings in Dallas[7] and Orlando.[8] I am sure each of you has particular images burned onto your memory that sum up the emotion of these tragedies. For me, they were the pictures of the African-American DART officer being hugged by a white medical professional at the hospital in Dallas,[9] and the gay male couple embracing outside the police station in Orlando.[10] Both couples embraced with all the love and hope and fear of the world in their eyes. When I saw the pictures of Orlando, I cried. And when I saw the pictures of Dallas, I cried again. I felt as if the winter ice was breaking up during the spring thaw.[11]

I believe that the essential nature of an individual man or woman is good. I approach this question with a healthy dose of humane uncertainty.[17] But to the extent I can form an opinion, that is it.

I also believe, however, that something in our psyche causes humans in groups to press our advantages over perceived weaknesses or differences of others.

This aspect of group psychology plays classically in the civic arena.

I do not ask that you agree with me on this point. I offer it as an explanation of what I now feel compelled to say.

I have tried to determine the causes of the terrorism in Orlando, Dallas and San Bernardino and the horror of Baton Rouge, St. Paul and Milwaukee. And I have reluctantly concluded that we must all share the blame. But those of us in positions of civic leadership – including higher education – must bear the greatest burden. We have a responsibility to lead the discourse in responsible ways and too frequently we do not succeed.

This has been a time of abject failure.

Over the last several decades, too many political leaders – Democratic and Republican – have preyed on our human group dynamics that tend to blame the “other,” and have exploited our anger, prejudice and insecurity for electoral gain.

When working men and women feel the legitimate pain of economic dislocation, too many politicians blame the government and policies such as affirmative action and immigration rather than searching for positive ways to expand economic opportunity for all. When we all fear the unknown and seemingly random strike of terrorists, too many politicians blame religious and ethnic immigrants and refugees and exploit those differences rather than looking at our own policies and our own home grown terrorists, such as Dylann Roof[18] and Timothy McVeigh,[19] whose ethnicity or religion are in the majority in this country.

And – apropos of the Dallas, Baton Rouge, St. Paul and Milwaukee shootings – when people of all ethnicities and political stripes express concern over the government’s use of deadly force, too many politicians of all points on the ideological spectrum and their supporters drive racial wedges and hate to place blame on the “other” rather than seeking ways to both protect police and guard against the inappropriate use of deadly force in the future.

As one who grew up in Mississippi, I recognize from the Civil Rights Movement of the 1950s and 60s the damage and violence this kind of divisive rhetoric causes.

During that time, Democratic Governors such as Ross Barnett and Paul Johnson, Jr. of Mississippi and George Wallace of Alabama, and many others, used hate to drive a wedge between poor blacks and poor whites in order to maintain political power.[20] They stood in the school house doors, the football stadiums and the TV studios and spewed venom into public discourse.  While it may be true that they never committed violent acts themselves, their rhetoric gave encouragement and legitimacy to the thugs who burned, raped, tortured and murdered men, women and children who were guilty of nothing more than being born with dark skin.

Those civic leaders’ words mattered. And their hate had consequences.

Hate is like a spider’s web. A touch at any point sends shudders into the darkest recesses. The sleeping spider feels the vibrations, leaps to the point of contact and injects its toxic contagion into the body politic. It is of no importance that I did not intend violent consequences – that I only sought electoral advantage. I touch the web of hate and the damage is done.[21]

Words matter. And hate has consequences.

And politicians who use hate for political gain share the responsibility for those consequences.

But the responsibility does not stop there. Those of us who do not resort to divisive rhetoric are not absolved of complicity. We share responsibility if we do nothing to stop the poison. In his classic work, Inferno,[22] Dante noted that even Hell would not accept those who, in time of moral crisis, do nothing.

Several months ago, I finally got around to watching Trumbo,[23] the Hollywood art film about writers blacklisted during the McCarthy Red Scare. It earned several academy award nominations and Bryan Cranston, who played Dalton Trumbo, received the best actor Oscar. It reminded me of another era in this county’s history when leaders, for a time, stood aside as politicians preached hate.

One of the first United States Senators to stand up and denounce Senator McCarthy was Republican Senator Margaret Chase Smith of Maine.[24] She had the courage to denounce her fellow Republican, U.S. Senator Joseph McCarthy of Wisconsin, at the height of his popularity and power. And she did so as a very junior member of the Senate. She had everything to lose.

Senator Smith denounced McCarthy and said she didn’t want to see her Republican colleagues “ride to political victory on the four horsemen of calumny – fear, ignorance, bigotry, and smear.”

History has shown that when political leaders promote hate or stand idly by while others do, the public responds with hate.

What then shall we do?

Shall we despair? Shall we lose hope? Shall we allow people who seek to divide us by religion and ethnicity go unchallenged? Or shall we engage in efforts to create and foster opportunities for positive knowledge and engagement.[26]

I have hope because since Dallas, Orlando, Baton Rouge, St. Paul, and Milwaukee, some “everyday” citizens have taken powerful and emotional stands against the voices of hate in our society.[27] The media has taken note and some political leaders have followed suit.

I have hope because recent opinion surveys[28] indicate that the public is taking stock and it is beginning to say “enough is enough.”

But most of all, I have hope because of the growing number of people, like you – our faculty and staff – who are working to apply critical thinking and analytical reasoning to the great questions of our day – and are developing our students to their full potential as individuals and as members of the world community. I have hope because faculty efforts are underway to live out the best parts of our Methodist heritage to bring formal methods of positive engagement such as the Inter Faith Youth Core to this campus.

I have hope because you – our students – are here on this campus where we embrace John Wesley’s social gospel to “do good of every possible sort, and, as far as is possible, to all men.”[29]

I have hope because your commitment and your enthusiasm are infectious.

And I have hope because I know your plans for the future.

I do not believe that history’s inclination toward justice is inevitable. We must change the world.

And that change can begin here, at Texas Wesleyan, where our goal is to transform the world by transforming lives, one student at a time.

[3] See, e.g., New Life Episcopal Church, “Our faith family is connected by our seeking and finding God, and our loving, learning, serving and sharing our faith,” http://cometonewlife.org/about-new-life.

[11] The analogy of winter ice breaking up after the spring thaw has been applied to many types of emotional release.  See, e.g., Robert Penn Warren, All the King’s Men, Restored Edition, (Houghton Mifflin Harcourt)(Noel Polk)(2001).

[16] I have been deeply affected by the writings of Glen Tinder in his classic work, Political Thinking: The Perennial Questions (Longman Classics Series), 6th Edition (Pearson, 2004), and his notion of “humane uncertainty,” since my beloved undergraduate political science professor, Dr. Bill Hicks, assigned this reading at Mississippi College in 1976.

[21] The analogy of the spider web has been applied to many aspects of life.  See, e.g., Robert Penn Warren, ALL THE KING’S MEN, RESTORED EDITION, at 266.

[22] See, Dante Alighieri, The Divine Comedy (The Inferno, The Purgatorio, and The Paradiso), translated by John Ciardi, (The New American Library, 2004).

[24] Margaret Chase Smith, Declaration of Conscience, delivered on the floor of the U.S. Senate, June 1, 1950 (http://www.americanrhetoric.com/speeches/margaretchasesmithconscience.html).