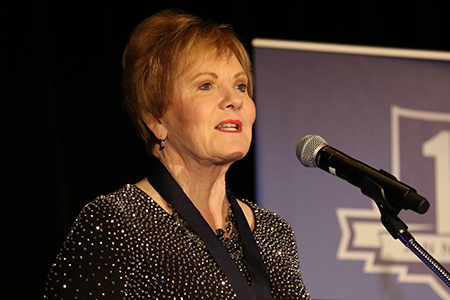 “This award is considered the most prestigious honor bestowed by the University and has been given out only two times before,” Frederick G. Slabach, Texas Wesleyan University President, said at the event. “[Kay’s] desire to render the utmost service to her fellow man is why we celebrate her tonight."

Granger shared her personal memories of attending Texas Wesleyan University and retraced her steps from business owner to Congress. She cited her commitment to safety as Mayor of Fort Worth, and National Security work in Congress as essential to successful cities and a strong nation.

In addition to the award, Granger led a discussion with U.S. Marine Corps Gen. John Kelly.

Kelly, who recently retired from service, served over four decades in the United States Marine Corps. As a one and two-star general, Kelly spent three years leading combat troops in Iraq and was a central figure in engineering what has become known as The Awakening Movement, one of the war’s key successes. During this movement, his unit helped bring an unprecedented reduction in the sectarian bloodshed that had gripped Iraq following the takedown of Saddam Hussein. He has served as the Senior Military Adviser to Defense Secretaries Robert Gates and Leon Panetta.

Previous recipients of the award are Nick and Lou Martin HON ’03, and Kenneth H. Jones, Jr., Immediate Past President of the Board of Trustees. Granger was also the Honorary Chair of the event.

The Law Sone Medal honors Former Texas Wesleyan President Law Sone. Sone was the longest tenured president in our history, serving in that role from 1935 until 1969. Dr. Sone, along with long-time board chair Edward Baker, brought Texas Wesleyan into the modern era.

Dr. Sone’s tenure included such firsts as the establishment of the college’s group life insurance and hospitalization benefits, accreditation by the Southern Association of Colleges and Schools, establishment of an employee retirement program and the construction of a large portion of the current campus.

Texas Wesleyan is a private, coeducational university in Fort Worth. The university has seen significant growth in recent years as the result of the revitalization of East Fort Worth and its award-winning marketing program. Founded in 1890, the university is currently celebrating its 125th anniversary, making it the longest-serving educational institution in Fort Worth.