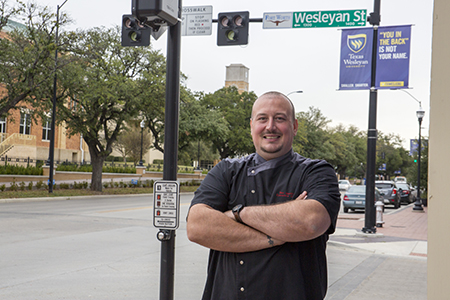 Above: Ben Merritt, chef/owner of Fixture - Kitchen and Social Lounge, poses in front of the location for his new restaurant, Ben’s Triple B, across from the Texas Wesleyan University campus.

Ben Merritt, Fort Worth Magazine’s 2016 Top Chef, first-ever 2017 Top Chef Master and chef/owner of Fixture - Kitchen and Social Lounge on W. Magnolia Ave., has selected E. Rosedale St., across from Texas Wesleyan University, as the site of his new restaurant.

The restaurant is the latest win for the Rosedale Renaissance, a charge led by Texas Wesleyan, in partnership with the City of Fort Worth and Tarrant County, to revitalize the historic Polytechnic Heights neighborhood and East Fort Worth.

The 3,400-square-foot restaurant, “Ben’s Triple B: Biscuits, Burgers and Brews,” will be located at 3016 E. Rosedale St., at the corner of Wesleyan St. and E. Rosedale St., and is scheduled to open late next spring. It’s the next restaurant and a brand-new concept for Merritt, who is a rising star in the Fort Worth food scene.

“Ben’s new restaurant is exactly what we have envisioned for this space,” Texas Wesleyan President Frederick G. Slabach, said. “It’s a great location and a great time to be at Texas Wesleyan. Our campus life is thriving and this is going to be ‘the’ place to eat and socialize for students, faculty and staff, and draw patrons from all over Fort Worth. This economic win for our campus and historic neighborhood is what happens when the city and community leaders come together with a vision.”

The restaurant will be open for breakfast, lunch and dinner, and will have a casual, fun atmosphere, with great biscuits and breakfast items, burgers, a full bar and plenty of TVs for sports fans.

“I’ve been working on a second concept for some time now, and the opportunity to be a part of the Rosedale Renaissance Project was a perfect fit,” Ben Merritt, chef/owner, Ben’s Triple B and Fixture - Kitchen and Social Lounge, said. “The University and the City of Fort Worth have welcomed me with open arms, and I can’t wait to serve my food from Ben’s Triple B to the students and faculty, and this growing revitalized community. Biscuits, burgers and brews will become a reality in 2018, and I look forward to seeing everyone there.”

Texas Wesleyan will pave two new parking lots to serve the restaurant and retail center patrons, one to the west at 3000 E. Rosedale St., and one directly behind Merritt’s new restaurant.

Texas Wesleyan has invested nearly $30 million in campus enhancements since 2013. The hallmark of these improvements is the Rosedale Renaissance, a public-private partnership that revitalizes the Polytechnic neighborhood and campus community.

The Rosedale Renaissance project represents four key pieces that were completed in 2015: 1) the Canafax Clock Tower and new entryway; 2) the United Methodist Church Central Texas Conference Service Center, which is also home to the bishop's office; 3) the renovation of the Polytechnic Firehouse, which is now the Bernice Coulter Templeton Art Studio and Gallery; and 4) a $1.8 million investment in the streets adjacent to campus that leverages $32 million in street improvements along East Rosedale.

Currently, Texas Wesleyan is in the process of completing a $19 million capital campaign for the new 44,000-square-foot Nick and Lou Martin University Center in the heart of campus, which is scheduled to break ground in the spring of 2018. 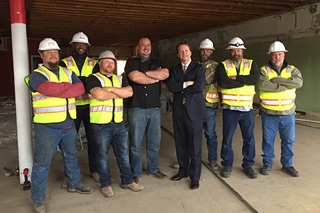 Texas Wesleyan owns the retail space in the entire 3000 block of E. Rosedale, which includes three vacant spaces. In addition to the space of the new restaurant, Texas Wesleyan will renovate the other two vacant interior spaces, which are 4,100-square-foot and 1,927-square-foot, respectively. Currently, a Subway sandwich shop and the Texas Wesleyan University Bookstore occupy space in the same strip.

The University is scheduled to begin interior renovations before the end of the year. Funding for interior renovations is made possible by a $572,299 forgivable loan from the City of Fort Worth’s Urban Development Action Grant Miscellaneous Revenue Fund, which furthers the Rosedale Renaissance and Texas Wesleyan’s 2020 Vision strategic plan goals.

Merritt’s improvements to finish out the space will begin in the spring, and take place alongside the University’s renovations. Merritt plans to open Ben’s Triple B by late spring 2018.

Above: Ben Merritt and University President Frederick G. Slabach with construction workers inside the future home of Ben’s Triple B.

Ben developed his passion for food and cooking by traveling the world during his time in the U.S. Navy. He has dedicated over 10 years of his life to the restaurant industry, and is an American Culinary Federation Certified Culinarian. During his career, Chef Ben has had the privilege to work and train alongside several of America’s prestigious chefs, including Chef Stephan Pyles.

The Fort Worth community is very important to Ben. He works closely with Fort Worth South, supporting various local community events. He’s also actively involved with TCU and the Fairmount Community Library.

Inspired by the art and science of cooking, Chef Ben creates New American food with an eclectic twist, and is creating an atmosphere of real community that draws diners to taste his amazing food.