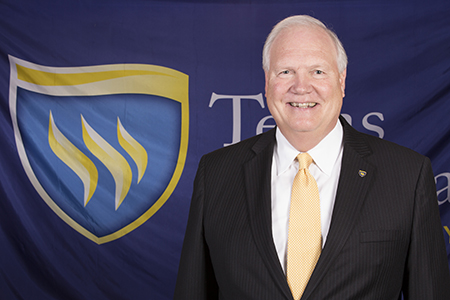 Tim Carter has been elected chairman of the Texas Wesleyan University Board of Trustees.

Carter has served 19 years on the Texas Wesleyan board. As chairman, he will manage and provide leadership to the board as it works to grow and promote Texas Wesleyan’s mission and 2020 Vision strategic plan.

“Tim has an intricate understanding of the values of our university and is an outstanding community leader,” President Frederick G. Slabach said. “We are honored to have him serve as board chair and know that his leadership in the Fort Worth community will be an invaluable asset as we work toward our 2020 Vision and beyond.”

Carter’s current term began in 2008. Since then, he has served on the Finance & Audit, Investment and Advancement committees. He was also chairman of the Governance Committee in 2015 and most recently served as vice chairman of the board for the 2016-17 academic year. His previous board service was from 1996-2006.

Carter joined OmniAmerican Bank in 2007 as the President and CEO. In that role, he directed the bank’s transition from a mutual savings bank to a publically traded company in 2010. Carter then guided the bank through its merger with Southside Bank in December 2014.

In addition to his distinguished banking career, Carter held the position of president and CEO of United Way of Metropolitan Tarrant County and president and CEO of the Harris Methodist Health Foundation. In addition to Texas Wesleyan, Carter currently serves on the board of the Fort Worth Promotion and Development Fund, the Federal Home Loan Bank, the Safe City Commission and Lena Pope. He is also chairman of the North Texas Leaders & Executives Advocating Diversity (LEAD).

Carter succeeds outgoing Chair Beverly Volkman Powell ’92 MBA ‘99, who served as chair for three years and vice chair of the board for four years. Powell has served the board for a total of 17 years and will continue her service as immediate past chair.

During her tenure as board chair, Powell effectively oversaw major developments at Texas Wesleyan, including the completion of the Rosedale Renaissance, the reinstatement of football, growth in enrollments and an increased endowment, and the launch of the Nick and Lou Martin University Center campaign – the most significant capital campaign at Texas Wesleyan in more than a century.

Additionally, Powell’s focus on best practices in non-profit board governance made a huge impact on the operations and outcomes of the Texas Wesleyan board.

The Texas Wesleyan University Board of Trustees governs the University, which is the longest-serving higher education institution in Fort Worth. Since 2011, the University has nearly doubled its endowment, grown enrollment and invested more than $27.4 million in campus enhancements and improvements.

Last fall, the University celebrated its most successful move-in day in history with more than 500 students now living in its residence halls. The revival of the football program, which will begin conference games in the Fall of 2017, has added to the invigorated campus community and thriving student life.