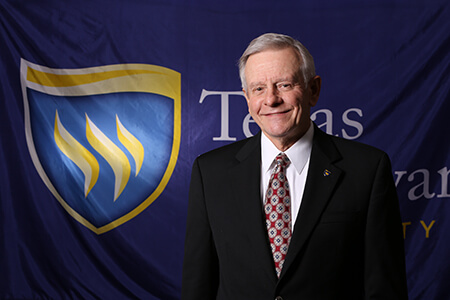 The Texas Wesleyan School of Business Administration is saddened to report that Dr. Rodney Erakovich passed away last month. Dr. Erakovich was initially hired in 1993 to teach management courses while completing his Ph.D. at the University of Texas at Arlington. After a brief hiatus, he rejoined Texas Wesleyan in 2008 as a tenure track management faculty member until retiring in 2018.

At Texas Wesleyan, Dr. Erakovich worked tirelessly to incorporate real-life experiences and company projects into his curriculum. In his International Management course, students worked with Fort Worth-based RadioShack on a strategy for international development to consider RadioShacks’ entry into Eastern Europe and the Balkans. As part of the project, he organized on-campus visits from RadioShack corporate representatives to give his students a chance to work directly with the company. He also worked closely with Alcon, an international medical supplies company based in Fort Worth.

Dr. Erakovich was heavily involved in the community through both his research and consulting work. He consulted for the cities of Rowlett, Desoto and Kennedale to conduct executive retreats and lead ethical culture, visioning, management and teamwork workshops. He also worked extensively with the City of Fort Worth on a transportation study to consider the viability of a public transport system, and served on the Fort Worth Streetcar Task Force to assess the feasibility of an urban streetcar transport system.

Dr. Erakovich's work even went beyond the Metroplex — he traveled extensively around the world and had his works shown in Great Britain, Austria, Serbia and Ukraine.

As a former officer and aviator for the U.S. Army (1964-1992), it is no wonder that Dr. Erakovich had such high morals, values and integrity. He was extremely professional, courteous, honest and always got the job done — he was the kind of person that you could always count on. He was a mentor to not only his students but his colleagues as well. He carried with him a fantastic enthusiasm and was very passionate about his work.

Always one to show you pictures of his family from his accordion wallet, Dr. Erakovich was a loving husband, father and grandfather. He will be dearly missed, but his memories will live on with his family, faculty and countless students that he impacted.