Football season ends on a high note for Rams 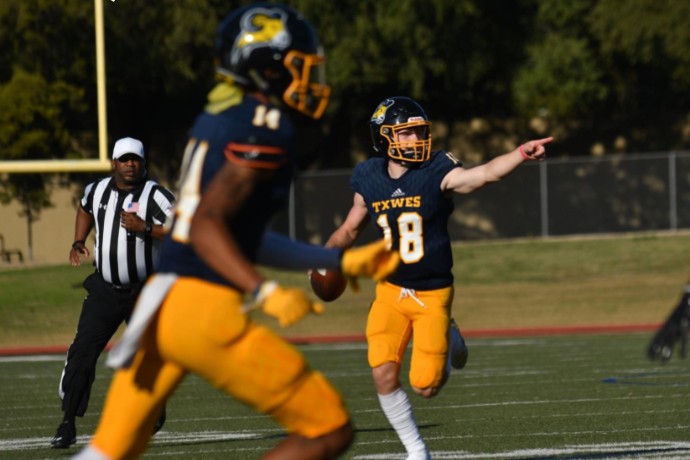 FORT WORTH, TX - Texas Wesleyan Football (3-7, 3-5 SAC) improved on its win total for the second-consecutive season Saturday afternoon when the Rams put a complete game together in a 24-6 victory over Wayland Baptist (4-5, 3-4 SAC).

Freshman quarterback Dalton Dale got his first collegiate start and delivered. Dale completed 7-of-14 passes for 101 yards and rushed for 92 yards on 20 carries. Take away the sacks and Dale accounted for 126 yards when he chose to take off running. Dale got support in the backfield from senior Jermarcus Jones (17 carries, 123 yards, 2 TD) and Trey Jackson (9 carries, 104 yards.) TXWES rushed for a total of 322 yards averaging 6.3 yards per carry, the most rushing yards in a game since the 353 yards in 2018's season finale against Ottawa-Arizona.

Outside the ground game, dominating moments by the defense set the tone:

Back to offense, another freshman was a major contributor in the passing game. Receiver Lonte Nettles Jr. - who had caught one pass for one yard this season prior to Saturday afternoon's tilt, led all receivers with 51 yards through the air on three grabs, including a 38-yard reception on a crossing route from his slot position that left the defense confused and Nettles wide open to safely make a beautiful reception off a drop-in-the-bucket throw from Dale.

The Rams finished the season 3-1 at home and could finish in a three-way tie for fifth place in the SAC depending on how action goes in the final week of the regular season. All SAC football teams still have one game left to play next weekend except the Rams, who were the only team that received an irrelevant bye week at the end of the season in the odd-numbered conference.