From the Magazine: Gridiron Heros 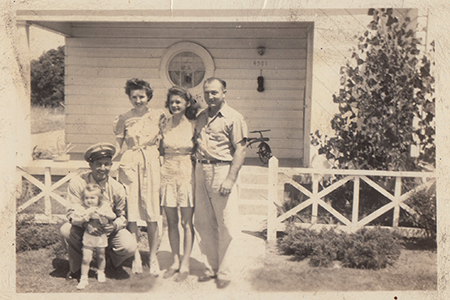 Above: McCarty, in his Coast Guard uniform, and wife Jean visited Splawn, wife Beryl Hooper Splawn (on right) and their daughter Susan at their house in 1942 or 1943. The McCarty’s marriage was brief and after Hall was killed in action in 1944, McCarty married Beryl. Daughter Marsha McCarty was born in 1946.

Marshall Monroe McCarty, known to friends as Munsy, was in the 6th grade when his mother took him to the depot in Gainesville and put him on a train bound for Fort Worth — to an aunt’s house in Polytechnic Heights where he was to live.

The abandoned boy, who would later become a gridiron great, soon realized there was no room for him in his aunt’s house either. So began a long journey of house hopping, one that frequently landed in the Avenue G home of his best friend, Hall Jett Splawn Jr. McCarty, or Monroe as he was more formally called, became a quasi-adopted son.

Hall and Munsy were more than friends — they were nearly brothers. That bond converged on a junior high field, giving the talented athletes an edge when they landed on the Weatherford Junior College team in 1934. A Weatherford reporter once called McCarty “the outstanding man on the field” during a game against Ranger where his “beautiful punting” kept the opponents deep in their own territory.

Meanwhile, Texas Woman’s College decided to readmit men and change its name. The newly minted Texas Wesleyan College promptly revived its football program in 1935 by poaching the Weatherford coach, W.H. (Gus) Miller, most of the team — including local boys McCarty and Splawn — and the Ram mascot. A football coup of sorts.

Thus began Texas Wesleyan football Glory Years, known to some as the Hall Splawn years. But there wasn’t one without the other back then. McCarty was usually the one flinging the ball to Splawn, who was small but quick and wily.

McCarty, who led as a co-captain his final year, was known as “triple-threat” because, as one reporter wrote: “… he does the punting, passing, punt returning, most of the ball-toting and also calls signals. Then he’s strong defensively too.”

McCarty even surpassed legendary “Slingin’ Sammy” Baugh’s TCU passing record in 1937 when the “163-pound, triple-threat halfback” successfully executed 31 of 46 passes for a total of 273 yards. Most of them probably landed in Splawn’s hands. Splawn was a class favorite and known as “the best running back in our circle.” The team went 8-2-1 their first year, with Splawn being touted in The Rambler as “the stocky, sparkling half that led the Rams offense in almost every game.” He was chosen as a team co-captain, and he and McCarty both were named lettermen that fall.

Oh, and McCarty (and sometimes Splawn) drove the team bus as part of their work-study scholarship, racking up more than 15,000 miles in three years.

The team continued to prosper after the boys graduated, and by 1941 the Rams were on top, ending the season with a co-championship. And Pearl Harbor. The gridiron program was suspended indefinitely due to war. Again.

By then, Splawn and McCarty were coaching and teaching: McCarty at Winters Junior College, Splawn at William James Junior High and Riverside High School.

McCarty chose to be proactive about the outbreak of war: He enlisted in the Coast Guard and urged his buddy Splawn to join him. But Splawn had married Beryl Hooper, the “prettiest girl in the school,” and they had an infant daughter, Susan. He would stay.

He should have listened to Munsy. The next year Splawn was drafted and sent to France, where he died a hero in battle in November 1944.

McCarty never left the U.S., but he did take his best friend’s last request to heart: If something happens to me, take care of Beryl and Susan. In 1946 he married Beryl and adopted Susan. Ten months later their daughter Marsha was born.

Splawn’s daughter Susan calls this saga the tale of her two fathers: The inseparable friends who married the same woman and who each gave her a beloved daughter. After marriage, McCarty settled into

After marriage, McCarty settled into living, getting a job with the water department, then a friend’s Haltom City grocery store before moving to a sales job at Ben E. Keith, where he stayed for 35 years. He was 85 when he died in 2000. He was the proud father of two daughters, four grandchildren and five great-grandchildren.

But the boys’ stories live on through their daughters, Susan Case Splawn (she went by McCarty since age 5) and Marsha McCarty Hilcher. They recall Daddy telling them about that one night on the way to Lubbock when the bus he was driving died and the players all spilled out and pushed until it started.

Or the time Monroe dropped a bucket of clothes on his toe and it swelled all up and they had to get someone else to kick that night. He had a crooked toe the rest of his life.

But the best story was the time that “Dad” made a pass to Hall that won an important game.

One unknown sports writer described the end of the 1937 game against the West Texas State College Buffaloes this way: “Just three minutes before the final gun was scheduled to crack the air, McCarty, standing behind his own goal line in punt formation, faked the kick and shot a long pass to galloping Red Rutledge, who did some fancy stepping and twisting to evade a half a dozen tacklers and get up to midfield before he was stopped.

“Again McCarty dropped back and coolly tossed another long aerial to Hall Splawn, who was brought down by the Buffs’ safety on the 4. Then after three tries, Splawn tore around the left end to score the winning touchdown."