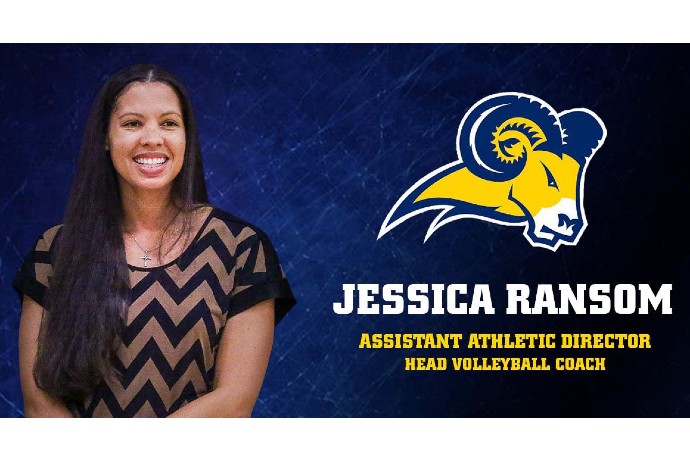 TXWES Athletics is proud to announce the promotion of Jessica Ransom to assistant athletic director and deputy Title IX coordinator for athletics. Ransom adds the administrative responsibilities to her existing role as head volleyball coach for the Lady Rams.

Athletic Director Ricky Dotson said that since Ransom's first day on campus, she has embodied everything Texas Wesleyan Athletics represents. She will be a vital asset for the administration and a voice he will lean on heavily.

"Jessica is a tremendous role model who constantly recognizes her responsibilities to the University and our athletes," Dotson said. "Her work on and off the volleyball sidelines speaks for itself. If her on-court success is any indication, then there are more exciting days to come for TXWES Athletics."

Ransom has led the Lady Rams to 68 wins in three seasons and three straight trips to the National Tournament opening round. Her winning percentage (.723) is the best among all coaches with at least three seasons. She has also coached three NAIA All-America selections and 18 All-Conference selections.

Dotson concluded, "I recognize how invaluable a diverse athletic department is. Having Jessica's voice as part of our decision-making will serve Texas Wesleyan well, and will ensure that the voices of all our athletes will be heard."

We caught up with Ransom to learn more about her new role.

Tell us about your new role and responsibilities as assistant AD/deputy Title IX coordinator.

A big part of my time will be spent with our Title IX Coordinator Chelsea Sepolio and the other deputy coordinators to ensure our campus is the best environment possible for all people while following all Title IX policies. I am also looking forward to learning from and working with Ricky and Kevin to continue growing and advancing our athletic department.

What interests you about the role?

I've always had a big interest in how athletic departments are run at the collegiate level. I knew one day I would like to try and merge my love for college athletics with my business degree, and I knew getting into the administrative side of athletics would allow me to do that.

How do you define success in athletics?

Success in athletics is focused on the student-athlete. If we can sign an athlete and watch them grow through graduation, I feel like that is the end goal. Volleyball and winning is fun and often times I can't believe I get to do what I love every day, but the ultimate success is watching these young people take the next step into the rest of their lives.

What has been your greatest coaching memory?

My greatest coaching memory was here at Texas Wesleyan back in 2019. Our team was down 0-2 sets and the team found a way to fight back and win three straight sets to win the match. The best part was punching our ticket to the National Tournament final site on our home court. The team then went on to battle the No. 4 team in the nation to a 5-set match, and then win the program's first match at a National Tournament final site since 2005. It was a great way to finish the year with such a fun, hardworking team.

My peers and the leadership around me inspire me daily! I strive to have the leadership qualities that I see in other coaches here at Texas Wesleyan. I see all the successes marked by trophies in the hallway and banners in the gym and hope that we can add more for the volleyball program one day soon.