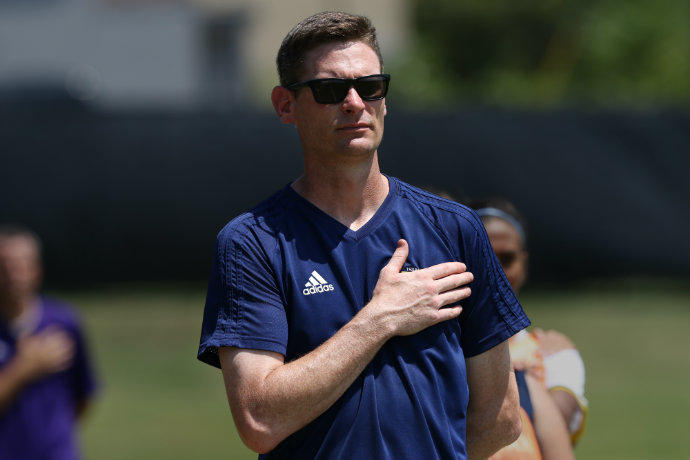 SILOAM SPRINGS, AR - An epic finish to an epic conference season. 150 career victories for Texas Wesleyan Women's Soccer head coach Josh Gibbs and a Sooner Athletic Conference regular season championship clinched - a night to remember. The emotions ran high Thursday night at rainy John Brown University when Texas Wesleyan (11-3-1, 6-1-1 SAC) survived a few late-game scares to win 1-0. The victory was the team's sixth in their last seven, the only blemish a 1-1 tie to the University of Science and Arts-Oklahoma.

Down the stretch, John Brown (12-3-1, 4-2-1 SAC) threw everything at Texas Wesleyan and came dangerously close to tying the game on a last gasp corner kick that bounced it's way into the box, off of a John Brown foot and off the left post before time ran out. The Lady Rams played a woman down in the final 1:22 seconds after Katelynn Teufel was given a red card.

Those 82 seconds were absolute mayhem as the Eagles scrambled to get any opportunity into the box to answer an early goal from the conference's leading scorer Tameir Grosvenor (assisted by Taylor Ross) in the 4th minute. But John Brown's aggressiveness didn't start in the waning seconds, it started soon after Grosvenor put Texas Wesleyan in front.

John Brown out-shot Texas Wesleyan 24-5 and even had a few last second chaotic leg-swings in a crowded box that didn't make the box score. Christy Zwart played the first half and Lauren Bond played the second in goal and recorded two saves each - the only shots on goal despite John Brown's offensive assertiveness - many getting discarded by Ram defenders blocking shots away from danger.

"John Brown is incredible, very well coached, and they threw everything at us for over 80 minutes," Gibbs said. "We were able to defend. I'm extremely proud of our team, it can't be overstated. What they've been able to accomplish this season is special."

Grosvenor had four of the team's five shots - Drea Molina managed the other attempt. John Brown had nine corner kicks to Texas Wesleyan's three and had another shot hit a post in the 78th minute. Earlier this season, women's soccer won its first game since 2013 when getting off less than 10 shots. They've now done it twice in 2018.

THE LEADING MAN
Gibbs took over the Texas Wesleyan Women's Soccer program in 2006 and becomes the 23rd active coach in the country to reach 150 career wins. With a Bacone forfeit on Saturday, he'll have 151. Gibbs received his Bachelor of Science degree from Texas Wesleyan in 2003 after playing for three seasons. Gibbs now has a career record of 150-73-12.

GETTING SOME HELP
Wayland Baptist upset USAO, Tuesday 1-0. USAO and a loss to John Brown were the only scenarios standing in the Lady Rams' way of winning the regular season conference crown.

WHAT THIS MEANS
The victory tonight clinched the Lady Rams the No. 1 overall seed in the Sooner Athletic Conference Tournament, which means the Lady Rams could potentially have three home games on their way to a NAIA Tournament appearance. It's the first time Texas Wesleyan has secured the No. 1 seed in a SAC Tournament since joining the conference in 2013.

WHO THEY WILL PLAY
Southwestern Christian is the likely candidate - with Oklahoma City and Wayland Baptist still left on their schedule but if Southwestern Christian somehow wins those next two games, they can leap-frog Mid-America Christian, who also still has Oklahoma City left in their regular season. Texas Wesleyan beat both this regular season, but MACU played the Rams closer, a 2-1 ball game just last week.