Lady Rams end historic run with loss to No. 19 Jamestown 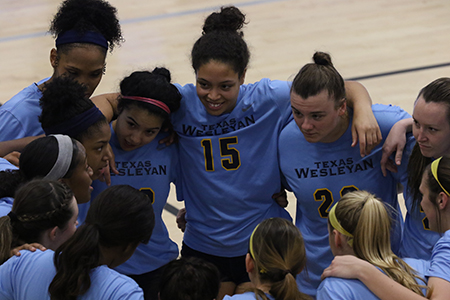 The Lady Rams historic run came to an end after the Jimmies protected their lead throughout the match with great blocking. UJ just stayed a step in front of TXWES, limiting Lady Ram chances with solid front row play.

Texas Wesleyan showed bursts of great play, starting with a Shelby Stinnett service ace to cap a 4-1 rally to start the first set. Stinnett also contributed three kills to another 4-1 rally in the third.

The senior from Haslet, TX explained what it meant to play beside her teammates this season, "This has been one of my favorite group of girls to play with. We may not have been the tallest team, but we have always had such a big passion and fight for this game and each other. It was about time we got what we deserved and that was going to nationals. It may not have been the outcome we wanted, but it was a huge step forward for this team and the program."

Stinnett continued, reflecting on her prolific career at TXWES, "As I look back on my time as a Ram, I achieved so much more than I ever thought I would. These four years have been the peak of my career and I am blessed to have had the college athletic experience. I'm so thankful for coach Weaver and the amazingly talented girls I've had the opportunity to play alongside over the years. I will forever cherish my memories within this program and I'm honored to be Ram."

After the match, the Lady Rams spent some time with students from St. Paul's Lutheran School. Led by assistant coach Kristina Gafford, the five Lady Ram seniors helped students of St. Paul's learn what it takes to be a Champion of Character by encouraging the Eagles of St. Paul's Lutheran to come up with their own ideas to create skits that focused on the NAIA's five core values of integrity, respect, responsibility, sportsmanship, and servant leadership. The kiddos made a signed 'Go Rams!' banner and gave the team snacks for the trip back to Fort Worth.

The five seniors, McKenzie Black, Kiersten Mebane, Chalon Anderson, Brianna Jaramillo, and Stinnett, end their careers with the distinction of bringing the program back to the national tournament for the first time since 2005. The seniors helped the program rack up 94 wins and a 49-16 conference record in their time at TXWES.