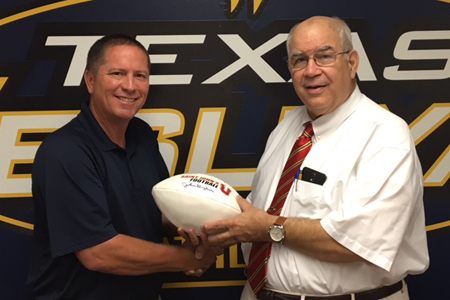 Football is coming! Although still just over a year from playing its first game, the Texas Wesleyan Football program is continuing to generate excitement and support.

Gagliardi is college football's all-time winningest coach with 489 coaching victories, all of them at the small college level. He was inducted in to the College Football Hall of Fame in 2006 after spending the bulk of his career at St. John's University in Collegeville, MN (1953-2012). He led the Johnnies to four national titles including two NAIA National Championships (1963 and 1965) and two NCAA Division III National Championships (1976 and 2003).

Gagliardi's football career was just beginning as Texas Wesleyan's was coming to a close. In 1943, he was playing for Trinidad High School in Colorado. Trinidad's head coach was called in to service in World War II and the principal was going to cancel the season until Gagliardi proposed that he coach the team on a trial basis. The trial worked and Trinidad won a conference championship that year.

Crook played for Gagliardi from 1965-1968 (winning an NAIA National Championship as a freshman in 1965) and saw many parallels between Gagliardi's program and the budding program at Texas Wesleyan. He asked his former coach if he might send a note to Prud'homme and Gagliardi delivered a signed football with the inscription, "Welcome Back."

"That will be the first thing going into my office," Prud'homme said. "He revolutionized the game in some ways with his non-contact practices and focus on precision. He is the winningest coach in college football, and that says a lot. You don't do what he's done with that kind of sustained success without being an outstanding person outside of just being a coach."

Dr. Crook was on the exploratory committee for football when a decision on bringing the sport back was being made. He remembered his time as a player fondly and expressed great pride in being a part of the legacy of St. John's Football. "I didn't realize how much it meant to be a part of that experience until about 25 years later," Crook said. "I think that having football back on campus is going to make a big difference in the college experience for our undergraduates. There is nothing like an NAIA football game."

At Texas Wesleyan, student-athletes have a chance not just to be a part of a legacy, but to create a legacy for a program that has not competed on the gridiron in 75 years.

Prud'homme and his staff have been working diligently to build the Texas Wesleyan program from scratch. They have already met the goal of 75 commitments for the leadership class that will arrive on campus in August, with no intention of slowing down on recruiting.

A lot must be accomplished before those students arrive, and the coaching staff remains hard at work. Equipment must be purchased (Prud'homme recently purchased 700 pairs of shoes). Uniforms and helmets must be designed. The new weight room in the Brown-Lupton Center is coming together, while coaching offices are nearing completion.

All of those preparations will come together in what will be a wonderful celebration and the beginning of something special in the fall of 2017.

Texas Wesleyan University
At Texas Wesleyan, we have a rich history and a Texas-sized reputation. As stewards of the University, it is our responsibility to build a future as bright as our past.
Upcoming Events
Jul
16
Wesleyan Night with the Rangers
Aug
20
Summer Graduation - Nursing Programs
Aug
27
TXWES football vs. Arkansas State University Queretaro