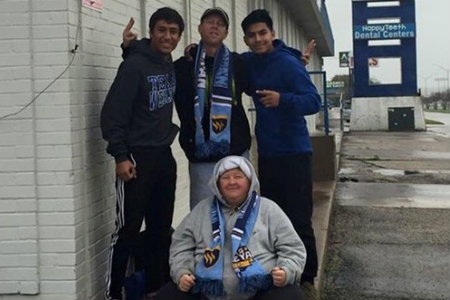 Recently, the team has been raising money by selling Texas Wesleyan scarves. They received an overstock in one of their shipments, and head coach Tyler Powell decided to pass them on to people in the community rather than sell them.

Members of the team went up and down Lancaster Avenue in the area surrounding the Presbyterian Night Shelter, handing out the scarves.

"It was an extremely rewarding experience," team captain Ross McArthur, said. "It made you realize how little they actually have, and it's great to give them something so simple to make their day."

In 2015, the Presbyterian Nigh Shelter served over 90% of the area's homeless population, helped 1,020 clients transition to safe housing and served nearly half a million meals.

"We are always looking for different ways to help our community," head coach Tyler Powell said. "In this case, we were sent extra scarves and decided to pay it forward. The guys saw what a difference it made."