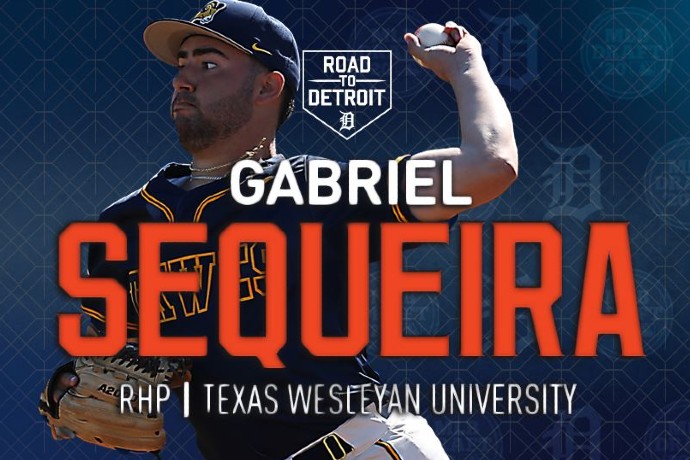 Last week, Texas Wesleyan Rams baseball LHP, Gabriel Sequeira, announced that he signed a contract with the Detroit Tigers. RamSports.net caught up with him for a Q&A on his experience, future plans, and more.

Sequeira is a junior management major from Cypress, Texas. He played two seasons at NCAA DI Sam Houston State before making his way to Fort Worth. Although the 2020 season was cut short by the coronavirus pandemic, Sequeira made a tremendous impact. He ranked first in the NAIA in wins (6), strikeouts (82) and second in innings pitched (47.0). The junior held an ERA of 2.11, limiting batters to just .216, while tacking on 82 strikeouts in eight appearances. He was on pace to break the program's single-season strikeouts record before the season was halted, a record that has stood since Gary Young fanned 165 in 1972. He finished with double-digit strikeouts in three consecutive outings, and never finished an outing with less the six K's.

"Gabe brought instant credibility to our program," commented head coach Bobby Garza. "He is a professional all the way around. He was quick to lead by example but also was willing to get involved showing the younger players how to work like a professional. He is definitely a special player, and his ability to throw 90-94 with four pitches for strikes on command is rare."

Sequeira was dominant in an early season matchup of top 25 talent, the 17th ranked Rams taking a decisive 6-1 win over No. 7 Bellevue. In that game, Sequeira tallied 16 strikeouts, a career-high, in one of the best moments of the 2019-20 TXWES Athletics year as voted on by fans. His 16 K's was three shy of the program record, although the record reflects a nine-inning game – Sequeira posted his 16 K's in a seven-inning game.

Read on for our exclusive Q&A interview with the newest Detroit Tiger.

This has to be a dream come true for you, describe the thoughts and emotions that went through your mind when you finally signed on that dotted line and made it official.

GS: Going through the process was very mind blowing to me because of how everything just came up out of nowhere really. When I received the contract and my signing bonus I had a rush of happiness and joy especially with my family.

Can you give our readers a little insight into the whole signing process, from the first time the Tigers contacted you to the moment you signed your contract? What is that whole experience like?

GS: The Detroit Tigers organization contacted me while I was up in Minnesota for summer ball with the St. Cloud Rox. They had sent an area scout up to watch me pitch and liked what I had to offer and gathered more background info on me the next day. I originally received the offer 2 days after they saw me and flew me out to Tampa, Florida to go through my team physical to clear me to sign. Overall, it was a first class trip and experience from touring the facilities and learning about what the Tigers organization is really about.

What brought you to TXWES?

GS: I left Sam Houston to pursue becoming a professional baseball player. My former teammate from Cypress Creek Brayden Bahnsen had told Coach Garza that I had been looking for a place to play and really be scouted to play at the next level. One of the best choices I have ever made was coming to Texas Wesleyan and would not be where I am today without Kelly Shoppach, Robert Garza, and Brayden.

Although you had a limited experience with the shortened season, but what can you say about the level of competition in the NAIA?

GS: At the NAIA level you will come across players who have the competitive edge to really compete at the Division 1 level as I did. I always hear people say "oh its NAIA, you will dominate" but I still had to find ways to get some really great hitters out. You cannot doubt a hitter at the NAIA level one bit, they are just as good as players at high level junior colleges and Division 1 athletes.

How has Coach Garza and Coach Shoppach contributed to your development?

GS: They contributed to my development every day I was at Texas Wesleyan. Both have given me knowledge about the game that really allowed me grow not only as a ball player but as man, and for that I can't thank them enough.

Who has made the biggest impact on your athletic career?

GS: Many of my teammates have made an impact on my career, some made a huge impact like Jalen Evans, Jesse Ramirez, Trey Smith, Brayden Bahnsen and Tanner Ammeral were always pushing me to be better. Always on me if I was slacking and never let me settle for average.

What the best advice you've ever received?

GS: The best advice I think I have ever received would be "never doubt your abilities" and that always stuck with me and really changed how I am as a ballplayer.

What advice would you give your 10-yr old self?

GS: Never stop working, in the end it always pays off. You will have ups and downs, but it all depends on how you handle adversity.

GS: I mainly listen to Rap and Country music.

GS: All my teammates know I love Whataburger.

Do you have a specific routine/rituals you go through before each start? Any superstitions?

GS: I always would eat Whataburger before my starts, every single one of them. From there I do my daily routine with bands, wrist weights and weighted balls.

What teammate is the best to follow on social media and why?

GS: I would have to say Brooks Wallace mainly because he knows style and is one of the best barbers to ever cut my hair. Always preaching and trying to get people to grow spiritually but also physically which is the kind of positive energy you want to see and surround yourself with.