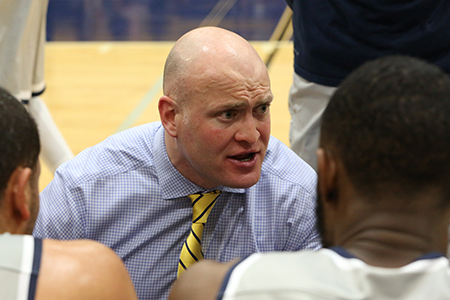 The Texas Wesleyan University men's basketball program has released its schedule for the upcoming 2016-17 season.  The defending Sooner Athletic Conference Regular Season Champions are set to tip-off the season on October 31.

Always a fan favorite. Ram Nation will be loud and proud in the Sid Richardson Center on October 15.  Scrimmages, Slam Dunk Contests, and NOISE! This night will have it all.

The season officially tips-off on Halloween when the Rams host Dallas Christian College. That game is scheduled for a 7:00 p.m. start in the SRC.

November 12 and 14, the Rams will take their talent to the Big Easy as they take on Dillard University and Southern University at New Orleans.

The Rams will open Sooner Athletic Conference play with a bang on December 1, when they travel to Oklahoma City to square off with the defending NAIA National Champions in Mid-America Christian University.  That game will be followed by a home game against rival Southwestern Assemblies of God University on December 3.

December 12 and 13, the Rams will play on back-to-back nights for the only time this season.  They will host Barclay University on the 12th and then host Huston-Tillotson on the 13th.  Two days later, they will travel to Portales, NM, to take on NCAA Division II Eastern New Mexico in an exhibition contest.

The Spring semester brings a full slate of conference action as all 16 games in January and February will be within the Sooner Athletic Conference.  Homecoming will be celebrated on Saturday, February 11, as the Rams take on the University of Science & Arts (OK).  Texas Wesleyan's final home game will be against the defending SAC Tournament Champions, Wayland Baptist, on February 18. The season then closes out with road games at John Brown University (February 23) and Bacone College (February 25).

The Sooner Athletic Conference tournament will go to a slightly different format this season.  The league's top eight teams will advance to the tournament.  Quarterfinal contests will be played February 28, at home sites hosted by the higher seed.  Oklahoma City University will then host the semifinal and final contests on March 3 & 4.  As always, the NAIA National Championship will be held in Kansas City's Municipal Auditorium, March 16-22.

- There are three teams on the schedule that the Rams have never faced, Southern University at New Orleans, Barclay College, and Bethel College.