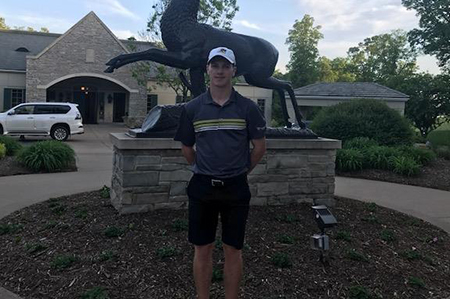 Rowan Lester, a freshman from Dublin, Ireland, became the 11th member of the Texas Wesleyan University Men's Golf Program to win the NAIA Individual National Championship on Friday.  Lester turned in a card of 74 on a rain-soaked course at TPC Deere Run on Friday to finish at +3 for the tournament.  His performance led the Rams back into contention for the title on their way to a third place finish.

Lester's win marked the second consecutive year that the NAIA Individual Title was won by a freshman from Texas Wesleyan.  David Ravetto accomplished the feat last season as well.

Lester led wire-to-wire on his way to the NAIA Arnold Palmer National Individual Champion award.  He took command of the tournament during a windy opening round in which he fired a round of -2 (69) on the par 71 (6,651 yard) championship course.  The lead dwindled to a single shot following round three, but a final round 74 under difficult conditions sealed a three-stroke victory.

"It was similar to yesterday," Lester said following the final round.  "I didn't play that well, but I chipped and putted amazingly.  From number nine to fourteen, I think I had four one-putts, and many of those were to par.  That kept me in it.  I stuck to what I could hit well, and my putting was just amazing all week."