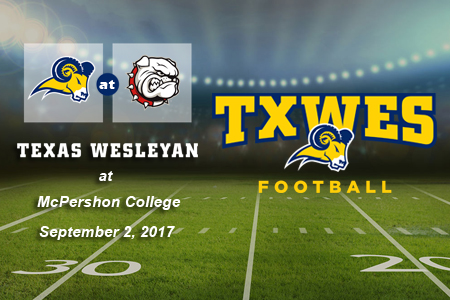 Texas Wesleyan football is ready to return to the gridiron and now the Rams know who their first opponent is. The Rams will take on McPherson College in McPherson, KS, on Sept. 2, 2017.

The game will be part of the GPAC-KCAC Challenge which the Rams will take part in during their first two seasons. The Great Plains Athletic Conference and the Kansas Collegiate Athletic Conference square off at the start of each football season; however, the GPAC has one fewer member than the KCAC.

“We are very excited to get on the field and have an opportunity to play McPherson College,” Head Coach Joe Prud’homme, said. “This is the beginning of a new era at Texas Wesleyan, and we appreciate the KCAC extending the invitation to play.”

Texas Wesleyan, a member of the Central States Football League(CSFL) has also released a revised schedule. The revisions come in conjunction with the CSFL’s addition of Oklahoma Panhandle State University to the membership. With Texas Wesleyan and OPSU joining the league in 2017, the CSFL’s membership will increase to nine teams.

The Rams now have five home games and six road games on their schedule. The home opener is the same, Texas Wesleyan will host Millsaps College(MS) on Sept. 9. That game is scheduled for a 2 p.m. start.

The contest with rival Southwestern Assemblies of God University(SAGU) from nearby Waxahachie, TX, is moved to Sept.23, and will be Texas Wesleyan’s first dip into CSFL play. Texas Wesleyan and SAGU are linked by a 30-mile stretch of Highway 287 and have a long history of athletic competition. Both institutions formerly competed in the Red River Athletic Conference and both made the move to the Sooner Athletic Conference in 2013.

The Rams are making its return to the football field after a 75-year hiatus. Texas Wesleyan will compete in the CSFL, a conference that features teams from four NAIA conference in Texas, Oklahoma, Arkansas and Arizona.

All Texas Wesleyan home games are covered live on www.RamSports.net/LIVE.