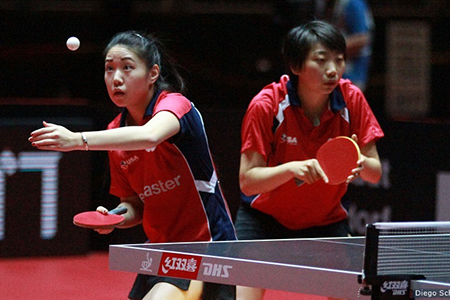 Texas Wesleyan University’s Yue Wu and UC Berkeley’s Lily Zhang teamed up for Team USA at the 2017 ITTF World Table Tennis Championships and advanced all the way to the quarterfinals of the main draw in women’s doubles.

In Dusseldorf, Wu and Zhang were the last remaining American athletes with a deep run in the main draw. Wins over teams from the Czech Republic and Canada, put Team USA into the quarterfinal round where they met China’s Chen Meng and Zhu Yuling.

Wu and Zhang were not intimidated by the heavily favored Chinese team. Rather, they had upset on their minds and jumped ahead 1-0, taking game one in deuce. Meng and Yuling recovered to take the following four sets but not without a challenge and some great table tennis from an American duo that showed it has a bright future.

Wu and the Rams won five of a possible six titles at the NCTTA National Championships this spring. The team’s titles in Coed Team, Women’s Team, Men’s Singles, Men’s Doubles, and Women’s doubles give the Rams 65 national championships since the program’s inception in 2002.